Home » NFL » Who is Robert Hunt? Meet the Dolphins lineman who scored one of the best touchdowns that didn’t count

One of the most exciting plays of the Week 10 “Thursday Night Football” game between the Ravens and Dolphins was a play that didn’t even count.

Miami guard Robert Hunt displayed impressive athleticism given his size — 6-6, 327 pounds — and tremendous awareness when he caught what looked like a touchdown pass with 13 minutes left in the fourth quarter of Miami’s eventual 22-10 upset of Baltimore.

Ultimately, the score was called back as Hunt was ruled an ineligible receiver who illegally touched the screen pass from Tua Tagovailoa. But like most big-man touchdowns, it took Twitter by storm and people immediately had their fun with it.

Of course, Hunt became the topic of conversation after the game. He sat down with NFL Network to break down what happened on the play.

Here’s everything else you need to know about the man behind one of the plays of the game in Ravens vs. Dolphins:

Did Robert Hunt ever play receiver?

Upon seeing his athleticism, ball skills and route-running ability, naturally one of the first questions Hunt was asked was whether he ever played receiver.

The answer, according to Hunt, is a little bit, but not recently.

“In high school, I played a little receiver and tight end,” Hunt said.

After being pressed by multiple-time Pro Bowl wide receiver Steve Smith Sr., Hunt conceded he played more tight end than receiver. And even though his days as a pass catcher at Burkeville High School in Texas are behind him, Hunt said his Dolphins teammates couldn’t help but give him props — well, some of them, anyway.

“The guys just laughed at me, saying, ‘It doesn’t count, man,'” Hunt said. “But I also got a couple of guys saying to me, ‘That was nice, that was the best play I’ve seen tonight.'”

Where did Robert Hunt go to college?

Hunt, 25, didn’t play his college ball at a blue-blood program. Instead, he traveled east from Burkeville to play under Billy Napier at Louisiana, choosing the Ragin’ Cajuns over Houston.

He spent five years in Lafayette playing for Napier, seeing action in 45 games.

When was Robert Hunt drafted?

The Dolphins took Hunt in the second round (39th overall) in the 2020 NFL Draft, ahead of players like Jonathan Taylor, Chase Claypool and Trevon Diggs.

Hunt was given a predraft grade that suggested he’d be a starter within his first two years, which has come true.

“He’s so physical in the run game; he just destroys defenders at the point of attack,” ESPN’s Mel Kiper Jr. said of Hunt prior to the 2020 draft.

Hunt has played in 26 games through his first two seasons, starting in 11 of 16 games last year and all 10 of Miami’s games this year. 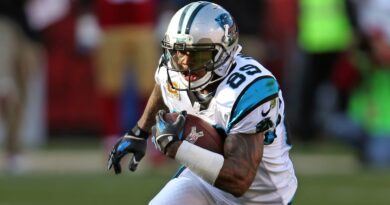 Pro Football Hall of Fame: My Class of 2022 modern-era predictions