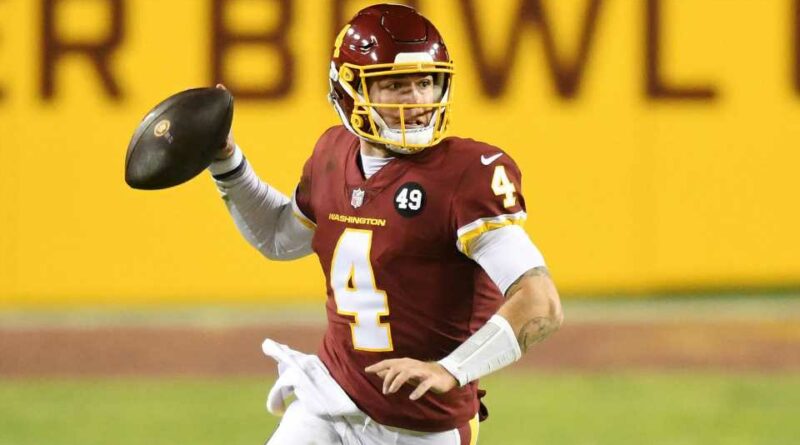 The Washington Football Team is looking for a Taylor-made win on Thursday.

The Washington Football Team QB carousel was among the most intriguing stories in football in 2020, and that has followed them into the 2021 season. Heinicke, the team’s backup who got some shine in the playoffs, is starting in place of an injured Ryan Fitzpatrick in Washington’s matchup vs. the Giants on Thursday night.

The second year of Ron Rivera’s Washington tenure has been marred by a QB nightmare: From Dwayne Haskins’ failure and release to Ryan Fitzpatrick’s hip injury in Week 1, the passer position hasn’t been settled. Now, they once again turn to Heinicke to stabilize the ship.

Here’s what you need to know about the quarterback who’s hoping to push Washington to their first win over the Giants since 2018:

NFL WEEK 2 PICKS: Straight up | Against the spread

Who is Tyler Heinicke?

Heinicke — pronounced “high-nuh-key” — is a product of Old Dominion University, where he was a four-year starter as the Monarchs’ QB. In those four years, Heinicke completed over 67 percent of his passes for 14,959 yards and 132 touchdowns.

Heinicke went undrafted in the 2015 NFL Draft, eventually signing a contract with the Vikings. He would go on to win the third-string job and stick with Minnesota until being released for injury in 2017. He spent about a month with the Patriots soon after that; he was eventually released in October 2017.

The journeyman backup made his NFL debut in November 2017 with the Texans, replacing an injured T.J. Yates. He completed his only pass before being checked for a concussion, ending his brief stay as Houston quarterback. The Texans waived Heinicke the following April.

Heinicke got an extended look as a member of Ron Rivera’s Panthers in 2018 after Carolina claimed him on waivers. While he appeared in six games backing up Cam Newton, he only started one, a Week 16 matchup vs. the Falcons in which he suffered an elbow injury. He completed 33 of 57 passes with a touchdown and three interceptions on the day. Heinicke was replaced by future Washington quarterback Kyle Allen. The Panthers eventually re-signed Heinicke and then released him the following August.

He found himself in the XFL in 2020 as a member of the St. Louis BattleHawks but did not see any action on the field. He once again became a free agent after the league suspended operations.

Heinicke made his return to the NFL in 2020, again playing under Rivera, but this time with Washington. He was signed to the practice squad on Dec. 8 before eventually being elevated to the active roster as Dwayne Haskins’ backup. Heinicke would replace the benched Haskins in a Week 16 matchup vs. the Panthers, completing 12 of 19 passes for 137 yards and a touchdown in Washington’s loss.

With Alex Smith hobbled with a calf injury, Washington turned to Heinicke for their wild-card round matchup vs. the Buccaneers in the 2020 NFL playoffs, and he played relatively well: Heinicke was 26-of-44 passing for 306 yards a touchdown and an interception. If nothing else, Heinicke kept Washington in the game.

Now, they’ll hope that he can go out and win one on Thursday.