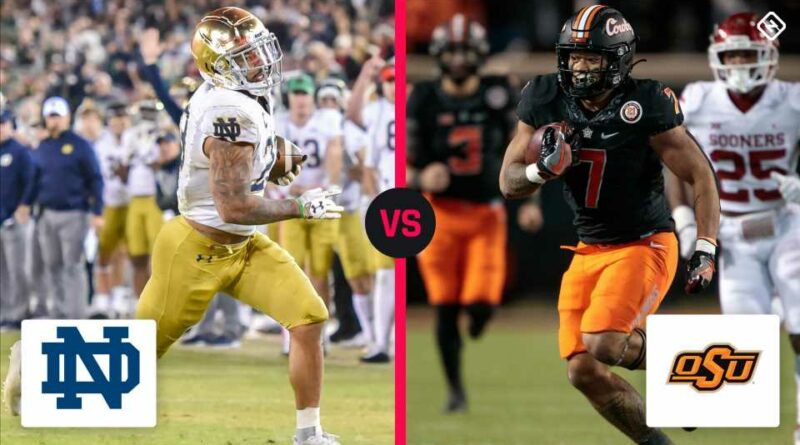 Notre Dame and Oklahoma State each went into championship weekend feeling like they had a chance to reach the College Football Playoff. A loss in the Big 12 Championship for the Cowboys and an Alabama win over Georgia in the SEC Championship eliminated the possibility for both teams.

The two teams will play now for pride, facing off in the Fiesta Bowl on New Year’s Day.

No. 5 Notre Dame (11-1) just missed out on the playoff, losing only to No. 4 Cincinnati earlier in the season, but it was unable to make the climb back into the picture after the Oct. 2 loss. No. 9 Oklahoma State (11-2) was inches away from winning the conference title, just missing the pylon on a diving effort by running back Dezmon Jackson.

Despite their long histories on the gridiron, Notre Dame and Oklahoma State have never before faced off in a college football game.

Here’s all the information you need to know about watching the Fiesta Bowl in 2022.

This will be the 51st edition of the Fiesta Bowl. The game has always been played in the Phoenix, Arizona, area, and this will be its 16th time being played in Glendale, the home of the Arizona Cardinals.

What to know about Notre Dame vs. Oklahoma State?

The Big 12 has developed a reputation as an offensive-heavy conference in recent years. The Cowboys have defied that stereotype in 2021.

Oklahoma State has been especially dominant in the run game, having allowed the fifth-fewest yards per game at 91.2. The Cowboys held teams to fewer than 70 rushing yards in six games, tied with Georgia and Wisconsin for the second-most such games in FBS, behind only San Diego State’s eight.

Notre Dame is one of the storied programs in college football, and does not often experience turnover among its coaching staff. On Jan. 1, it will experience a first in the program, as Marcus Freeman will become the first full-time Notre Dame coach to begin his Fighting Irish head coaching career in a bowl game.

The only comparable situation for the Fighting Irish came back in 2004, when Tyrone Willingham was fired following the end of the season and Kent Baer was named the interim head coach. Baer coached the Insight Bowl, and lost 38-21 to Oregon State, but did not return as head coach.

Jack Coan and Spencer Sanders were both solid for Notre Dame and Oklahoma State, respectively, this season, but these two offenses have been orchestrated through the ground.

Notre Dame’s offense had been led by running back Kyren Williams, who rushed for team-highs with 204 carries, 995 rushing yards and 14 rushing touchdowns. The Fighting Irish also had Tyler Buchner, Chris Tyree and Logan Diggs rush for at least 200 yards during the season.

The Cowboys were led in large part by Jaylen Warren, who rushed 237 times for 1,134 rushing yards and 11 touchdowns. He was injured and missed the Big 12 Championship, with Spencer Sanders and Jackson shouldering the load, rushing for a combined 64 yards on 32 carries.

Notre Dame is currently listed as a 2.5-point, according to FanDuel Sportsbook.

Where is the Fiesta Bowl being played in 2022?

The Fiesta Bowl will again be played at State Farm Stadium in Glendale, Arizona.

All of this year’s New Year’s Six Bowl games are televised on ESPN.