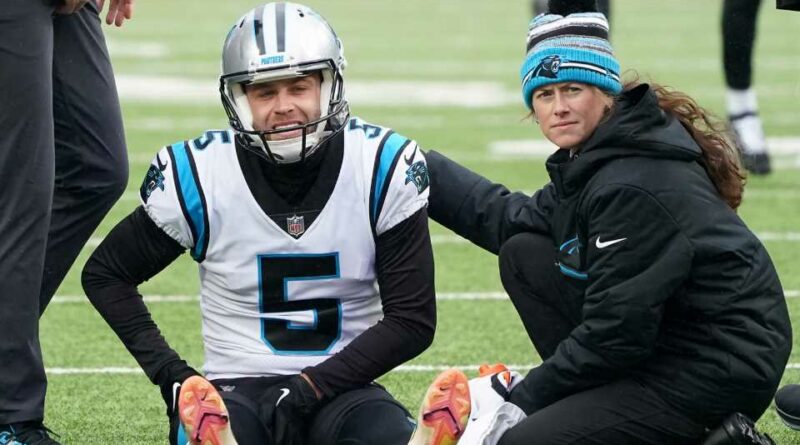 The Panthers are hoping to snap a three-game losing streak against the Bills on Sunday afternoon. If they’re going to pull off the upset, they’ll have to do it without a kicker.

Zane Gonzalez, the Panthers’ kicker, got injured before the Panthers-Bills game began. He suffered a quad injury during pregame warmups and was helped to the locker room.

Carolina is now in a predicament, as it doesn’t have another kicker on its active roster. And even if Gonzalez had suffered his injury before the deadline for practice squad elevations, the Panthers don’t have a kicker on their practice squad. So they still would have been without a true kicker for the game.

As a result of Gonzalez’s injury, the Panthers are scrambling to find a potential replacement. The team noted that punter Lachlan Edwards is the most likely replacement option for Gonzalez, but he has never kicked a field goal during his NFL career.

The Panthers had a few other players try field goals. Wide receiver Brandon Zylstra, running back Reggie Bonnafon and linebacker Frankie Luvu all practiced kickoffs after Gonzalez’s injury, so perhaps one of them could get a shot if they look like better kickers than Edwards.

Backup quarterback P.J. Walker was listed as another potential option, as he kicked in high school. However, he took a practice kicker during warmups and, as you can see at the end of the video below, it wasn’t pretty.

It looks like the Panthers will have kicker issues no matter who kicks on Sunday, so don’t be surprised to see Matt Rhule go for it often in favorable fourth-down spots. And if they find the end zone, they will almost certainly go for 2-point conversion instead of kicking an extra point.