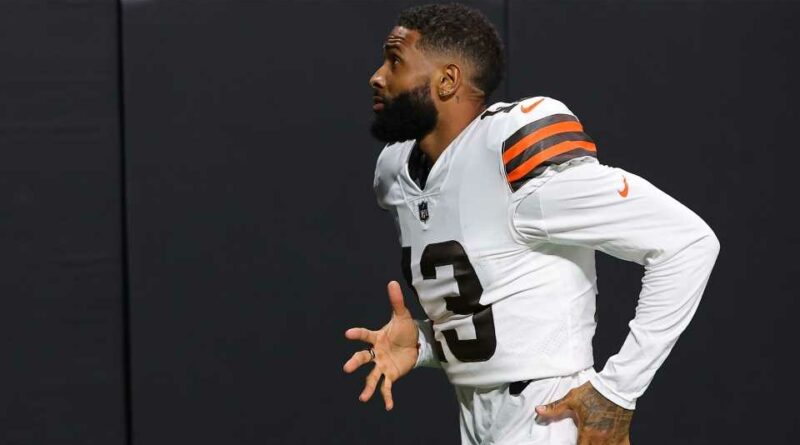 Just as Jarvis Landry was placed on the injured reserve, the Browns look set to bring another wide receiver back.

According to a report from ESPN’s Dan Graziano, the Browns are expecting Odell Beckham Jr. to make his season debut Sunday when Cleveland hosts the Bears in Week 3.

The news out of Cleveland comes just as Landry, the team’s second-leading receiver to this point in the season, was placed on IR with a sprained MCL suffered last Sunday in a win against the Texans.

It is likely that while Beckham will return to the field on Sunday, he won’t be tested too much against the 1-1 Bears. Beckham tore his ACL against the Bengals on Oct. 25, 2020, and has not seen game action since then.

Beckham was a full participant during practice both Wednesday and Thursday, according to the team.

WEEK 3 PICKS: Straight up | Against the spread

When Beckham had been on the field for Cleveland, he was a difference maker. The former Giants wideout hauled in 74 passes for 1,035 yards in 2019, his first season with the Browns, and he caught 23 passes for 319 yards in 2020 before his injury. He has caught seven touchdown passes over his first two seasons in Cleveland.

He hasn’t yet recaptured the magic he showed during his first three seasons in the NFL, however. In his age 22 through 24 campaigns, he reached 1,300 receiving yards in each season and caught double-digit touchdowns every year.

He sustained an ankle injury during the 2017 preseason, however, and wound up undergoing season-ending surgery after he left the team’s Week 5 matchup. He appeared in just four games that season and caught 25 passes for 302 yards.

Beckham will return to a Browns offense that could use a top target for quarterback Baker Mayfield, as no player yet on the season has reached 100 yards receiving over the course of the first two games. Tight end David Njoku leads the team with 94 yards on just five receptions, with Landry second with 80 yards on six catches. Mayfield has completed a promising 40-of-49 pass attempts, but has just one touchdown to two interceptions and 534 total passing yards.

The offense to this point of the 2-0 Cleveland squad has been largely carried by the tandem backfield presence of running backs Nick Chubb and Kareem Hunt. Chubb has rushed 26 times for 178 yards and three touchdowns, while Hunt has rushed 19 times for 84 yards.

Why Florida vs. Miami means so much this year

College football picks, predictions against the spread for every Week 15 top 25 game

A stadium roof collapse, diminished Favre and Moss, more: An oral history of the 2010 Vikings