DK Metcalf did not run fast enough in the 100 meters Sunday to advance to the finals of the USA Track and Field Golden Games and Distance Open.

But the Seattle Seahawks wide receiver fared better than some expected for an NFL player competing against professional sprinters. Metcalf’s time of 10.37 seconds was last among the nine sprinters in his heat and 15th of 17 who competed in the first two heats. American Isiaah Young had the fastest time of the first two heats with a time of 10.09.

“These are world-class athletes,” Metcalf said afterward on NBC streaming service Peacock, which broadcast the event, when asked whether he learned anything by competing in the event in Walnut, California. “They do this for a living. It’s very different from football speed, from what I just realized. So, like I said, just excited to be out here.”

Seahawks quarterback Russell Wilson was among those in the NFL impressed with Metcalf’s performance, tweeting that his teammate did “amazing.”

Asked on the Peacock broadcast if his time might encourage him to take the track again, Metcalf smiled and responded, “I’ve got minicamp to go to.”

Former Olympic sprinter Ato Boldon said on the broadcast beforehand that something in the range of 10.6-10.7 would be a good time for the 6-foot-4, 229-pound Metcalf.

“He did not embarrass himself,” Boldon said of Metcalf. “He hung with the pack. Yes, I think he’s eighth. But he ran well. I didn’t think he was going to run anywhere near that well.”

Before Sunday, Metcalf hadn’t competed in track since high school, when he was a standout hurdler and long-jumper and also competed on Oxford High School’s 4×100 meter relay team. He ran a 4.33-second 40-yard dash at the 2019 scouting combine and reached a top speed of 22.64 mph when he chased down the Arizona Cardinals’ Budda Baker to prevent him from scoring a defensive touchdown last October, according to NFL Next Gen Stats. At the time, that was the second-fastest speed any NFL player had reached in pursuit in 2020.

Metcalf made the Pro Bowl last season after catching 83 passes for a franchise-record 1,303 yards. 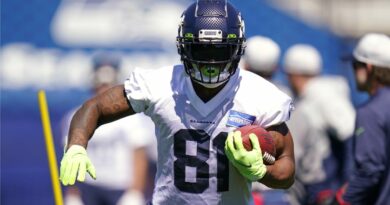