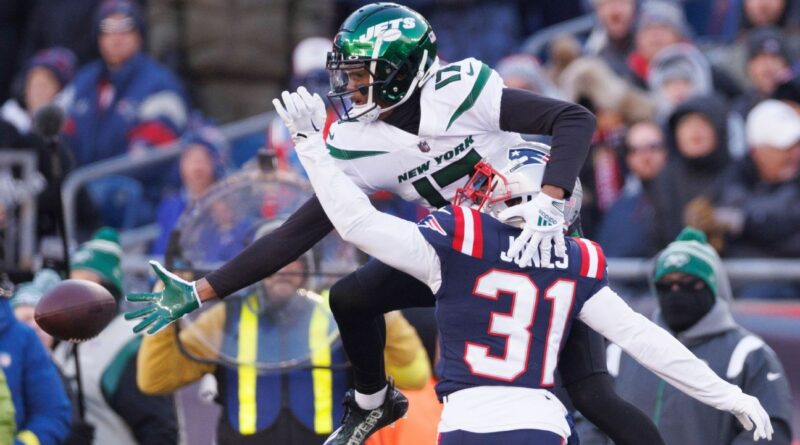 FOXBOROUGH, Mass. — New York Jets wide receiver Garrett Wilson, upset by one of the worst offensive performances in team history, unleashed his frustration after a gut-wrenching 10-3 loss to the New England Patriots Sunday at Gillette Stadium.

“This s— is sorry,” the rookie told reporters. “We’re out here looking sorry — and we know that we’re not sorry. That’s why it really hurts. We know we’re better than that. That’s why it’s hurts.”

The Jets (6-4) lost the on Marcus Jones’ 84-yard punt return for a touchdown with five seconds remaining, but it was the Zach Wilson-led offense that failed all day. Wilson completed only nine of 22 passes for a career-low 77 yards, as the Jets managed only six first downs and 103 total yards.

Incredibly, they managed only two total yards in the second half, the fewest yards by any team in a half this season. Of their 13 possessions, none reached the red zone.

“It was dogs—,” coach Robert Saleh said of the offense.

Garrett Wilson and fellow receiver Denzel Mims, who combined for only four receptions for 47 yards, were caught on camera showing frustration after errant throws by Wilson. After the crushing finish, Garrett Wilson stormed into the locker room, shouting to no one in particular, “I’m done with this!”

Later, he vented in front of his locker. He didn’t name names, but his rant seemed to be directed at Zach Wilson and the coaches. He said the coaches “have to put more trust in the receiver room” and suggested there’s a lack of accountability.

“It starts in practice,” Garrett Wilson said. “It’s got to be better, the things we see and don’t call out. It has to start getting called out. This is unacceptable. No one wants to feel like this, but that’s not enough. … Hopefully, this is a wake-up for some people in the facility, people in the facility to get on their details.”

He declined to single out anyone, saying it’s “all of us.”

“It starts during the week in practice — coaching, all of that,” he said. “We have to be detailed. We all have to have a better plan. This s—‘s not OK. Straight up. It’s not OK. How many total yards did we have? Yeah, that s—‘s not going to fly.

“Let’s call it like it is: We have to be better in the passing game if we want to be where we want to be at,” the former Ohio State star said. “And we know we can be there, that’s the most frustrating part. We don’t have to be in games like this. They didn’t even score on offense and we lost the game. Me, personally, I think we have to take it for what it is. We got our ass beat on offense and the results showed.”

It was a devastating loss for the Jets, who dropped their 14th straight game to the Patriots. A win would’ve put them in first place in the AFC East. Now they’re in last.

They had a chance to pull it out, getting the ball at their 20 with 1:52 to play. After two incompletions, they got a first down by penalty. On a third-on-1, they called a pass — a completion to running back Michael Carter for -2 yards. That set up New England’s game-winning punt.

Statistically, Zach Wilson had one of the worst games of any quarterback this season. He completed only five of 16 passes (31%) when he wasn’t pressured — the league’s lowest percentage, according to ESPN Stats & Information research.

Saleh said he never considered benching Wilson in favor of Mike White. Asked if he’d bench Wilson if the struggles continue, Saleh said it’s “the furthest thing from my mind.”

Wilson wasn’t intercepted, although he had two or three balls that could’ve easily been picked off.

“Yeah, it’s super frustrating,” Wilson said. “It was a frustrating day, of course. I feel like I had some balls that got away from me. But we got to find ways on offense. We got to do some digging, watch the film, and see what we can do better.”

Wilson mentioned the blustery conditions, saying, “I think you got to take into account it’s windy as hell out there too, guys.”

Mac Jones played in the same wind and completed 23 of 27 attempts for 246 yards with no turnovers.

The Jets played a fantastic game on defense, recording six sacks. Asked if he feels like he let the defense down, Wilson said, “No. No.” 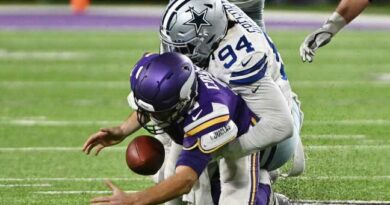