Former Ohio State wide receivers coach Zach Smith pled guilty to disorderly conduct Tuesday, as part of an arrangement that brings some closure to multiple allegations of domestic abuse made by Courtney Smith, his ex-wife. The deal reportedly also includes a protection order:

Courtney Smith was granted another protection order over the summer, when she accused her ex-husband of stalking and terrorizing her and trespassing at her home multiple times. Zach Smith mischaracterized the plea arrangement on Twitter as a de facto exoneration, leaving out the part where he pled guilty to a crime:

Smith characterizes the protection order as “a Mutual Protection Order,” which would apparently protect him from being “in a situation to get falsely accused of anything ever again.” And, because he is an extraordinarily Mad Online person, he continued going in on Brett McMurphy, who has tracked this story and reported it out from the beginning: 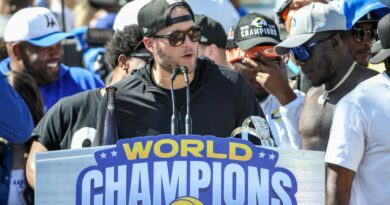