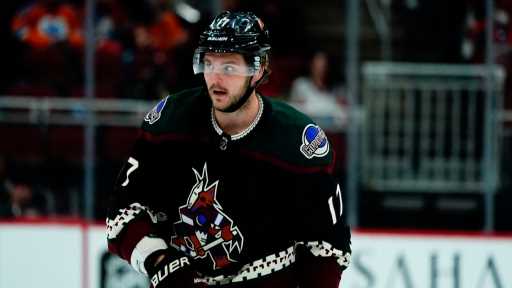 LOVELAND — The clearest indicator Alex Galchenyuk is not your typical AHL player is his Arizona sanctuary.

When a preseason knee injury with the Colorado Eagles deterred his latest attempt at a return to former glory, Galchenyuk returned to his house in Paradise Valley, Ariz., for eight weeks of training, recovery and home-cooked meals.

He bought the house when he played for the Coyotes in 2018-19. He has been with seven NHL organizations since then, including a return to the Coyotes last season, but the house has remained his safe haven through the ups and downs.

At 7,000 square feet and valued at $2.7 million when he bought it, according to The Arizona Republic, the place is suited for injury rehab. It’s decked out with gym equipment and a garage occupied by a sheet of ice.

“Like, four cars” of space, estimates Galchenyuk’s dad, former hockey player Alex Galchenyuk Sr. “I could run a camp there.”

As the Avalanche continue to labor through injuries and manage forward depth at the NHL level, Galchenyuk is one of the organization’s most fascinating options with the AHL affiliate Eagles. He was the No. 3 overall pick in 2012. He has 146 NHL goals and 354 points, including a 30-goal season in Montreal.

But his career was on life support as recently as February 2021, when Ottawa traded him to Carolina. The Hurricanes subsequently placed him on waivers and no other team claimed him. He cleared waivers to land in the AHL for the first time. Since then, he has played for Toronto and Arizona. The Avalanche gave him a professional tryout at training camp, but his injury temporarily derailed him.

“They liked my game, and they like what I can bring, so I definitely want to be here,” he said. “It’s on my end to show what I’m capable of and work my way up.”

So far, so good. He has six points in six games, including an overtime goal for the Pacific Division’s first-place Eagles.

“He’s probably one of the happiest guys in the locker room every day,” Eagles forward Callahan Burke said. “He’s fitting with our team nice. Everyone likes him. And on the ice, he’s got awesome skill. It’s cool to be able to play with a player of that caliber.”

Returning to his usual upbeat attitude was a strenuous process after the injury, another setback that left him “really upset,” his dad said.

The Wisconsin-born Belarusian forward invited his parents to the house. Galchenyuk needed to recover missing confidence as urgently as he needed to rehab a knee. The comfort of family helped. They flew to Arizona from their home in Miami and spent about four weeks with him.

His dad helped with strength and conditioning as Galchenyuk eased his way back onto the ice. Puck drills on the homemade garage rink kept him from growing rusty. They went hiking during their free time.

“Once I healed up I reached out to Colorado and wanted to come here right away,” Galchenyuk said.

Will he get that opportunity for the Avalanche? His ice time in Loveland is still strictly an audition, and the long-standing question is whether Galchenyuk’s off-puck game and defense can rise to meet his scoring prowess. But as the Avs consistently shuffle their back six forwards, Galchenyuk is emerging as a name to watch.

“He’s on a PTO, so he’s not under contract right now,” Avalanche coach Jared Bednar said. “So that’s a management decision. But he’s had a good start down there. He’s been working at his defensive game. If he had a knock at the (NHL) level, it would be the defending aspect to it. … I really liked his training camp here and his exhibition before he got hurt.”

The unusual context of Olausson’s debut

Oskar Olausson, sent back to Loveland after his NHL debut, said “it was awesome to get it done,” but the unusual nature of the game was challenging. Bednar put the 20-year-old on the second line, only for injuries to Evan Rodrigues and Mikko Rantanen to jumble the lines. That can make it more difficult to keep up with the flow of the game or develop linemate chemistry. “It was a struggle a little bit,” Olausson said.

Jean-Luc Foudy was also in consideration for the call-up that Olausson received, Bednar said. The 2020 third-round pick has 13 points in 17 games.

“I think he’s in the same kind of boat … playing a bigger role there,” Bednar said. “Consistently in the conversation for their most dangerous offensive player. … He’s probably a guy that’s deserving of the reward if he fits, if we can get a home game where we can manage his minutes.”

When Cale Makar reached the 200-point milestone Monday in Dallas — he’s the fastest defenseman ever to do so — his family was asleep. The Makars were in Ireland to watch Cale’s brother, Taylor, compete in the Friendship Four tournament with UMass. Taylor was an Avalanche seventh-round draft pick in 2021. The family watched the highlight of Cale’s goal the next morning.