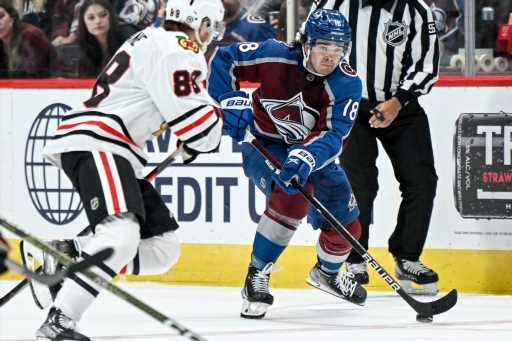 Demotion doesn’t sit well with anyone, but if there is one thing that Avalanche coach Jared Bednar appreciates about how Alex Newhook has handled his, it’s his reluctance to rationalize about it.

“There’s really no excuse to not be at my best when the team needs me,” Newhook said Wednesday, when given that opportunity. The question was whether he ever reminds himself that it’s only his second season in the NHL; that growing pains are natural. “That’s not really something that crosses through my mind too much.”

That’s the philosophy he hoped to echo in an individual meeting with Bednar on Wednesday morning.

“I don’t doubt his care or (that) any of the guys in our room care,” the coach said afterward. “If I did, they wouldn’t be here.”

Newhook is here, and there are no signs he’s going anywhere, even after his uneven start.

Most of the attention he has faced in the young season has revolved around the pressure he’s facing as a young player. He was given an audition for Nazem Kadri’s second-line center job. But after eight games without a point, he started playing more left wing — a combination of his increased production there and linemate Evan Rodrigues’ comfort at center. Newhook recorded a point in three consecutive games.

Then Colorado returned from Finland, and he disappeared for the next three games — literally in a 3-2 loss to St. Louis, rarely seeing the ice in the third period. It was a Bednar benching.

So Newhook sat at his locker room stall again the next afternoon, evaluating the errors.

“I think some of those (giveaways) at the blue line can be costly,” he said. “… Trying to regroup and trying to get back to my game here on this next road trip is going to be important for me.”

What’s a meeting with Bednar like under these circumstances? Newhook described the coach to The Denver Post as “particular” and “analytical” in his diagnosis of poor play. Bednar said he and other staff members — including general manager Chris MacFarland and president of hockey operations Joe Sakic — often compile analytics and their own observations based on film study to help a struggling player.

“We go over numbers, where he stands, what we need to see from him, and then we get specific on detail with the video,” Bednar said. “We’re solutions based, right? It’s my job to help Newhook be an impactful player. He has to be a willing participant in that and want to, and he does.

“Then get into specific detail on all kinds of situations in the game and where we feel like what will help his game improve. And then kind of narrow it down to I’d say three or four points he can have into his head before the game of, ‘OK, if I just do this, my game will come together to a certain extent.’”

The Avs were optimistic that Newhook was showing signs of progress during the NHL Global Series games in Finland. But in the three games since returning, the team’s expected goal percentages while he was on the ice have been staggeringly low, according to Natural Stat Trick: 39.8% against Nashville, 2.2% against Carolina and 20.7% against St. Louis. Bednar has noticed the forward is “not skating” on the bad nights. Getting to the bottom of why that is was at the core of their discussions.

“Here’s the thing: You look at Alex Newhook: Great shot. Great hands,” Bednar said. “Excellent skater. … If he’s not skating, he’s not going to be effective. You’re on pucks. You have relentless pursuit. You win more battles. But you’ve got to be driving your legs. And sometimes it can be a mental block. Sometimes it can be trying to do too much. Things aren’t going well. You kind of get away from the things that make you successful.”