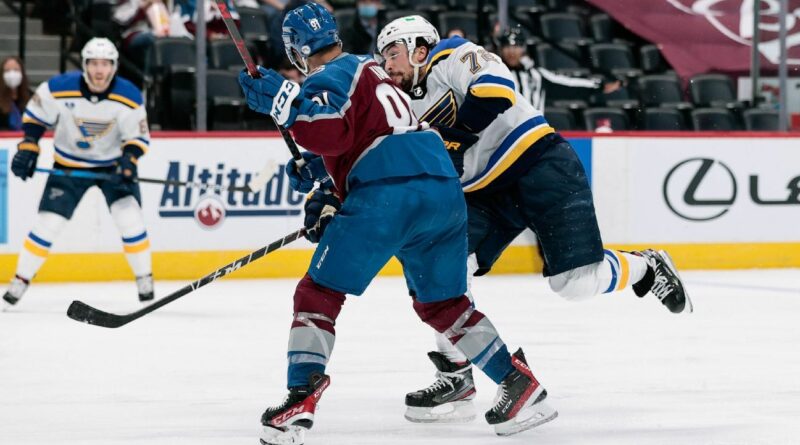 At 6 minutes, 30 seconds of the third period, Faulk released a shot on the Avalanche goal from the slot area. Kadri cut across in front of Faulk for a hit and appeared to make primary contact with the defenseman’s head.

The referees reviewed the play and assessed a five-minute major penalty and a match penalty for an illegal check to the head. Faulk did not return to the game, which the Blues lost 6-3 to go down 0-2 in the series.

Kadri has been suspended five times by the NHL since 2013, including twice in the playoffs while with the Toronto Maple Leafs. In April 2018, he was suspended three playoff games for boarding Tommy Wingels of the Boston Bruins. In April 2019, he was given a five-game suspension for a cross-check to the head of Jake DeBrusk of the Bruins. He had been suspended previously for an illegal check to the head in 2015, for injuring Edmonton Oilers forward Matt Fraser

“The guy can’t control himself,” said Blues center Brayden Schenn, who scored the Blues’ only goal of the five-minute power play. “In the playoffs, he’s a repeat offender. Bad hits. Greasy hits. He had a guy in a vulnerable position and he picked nothing but the head.”

Schenn compared the hit to the one delivered by Washington Capitals forward Tom Wilson on Blues forward Oskar Sundqvist, which resulted in Wilson getting a 20-game suspension from the NHL.

“Hopefully the league takes care of it,” Schenn said.

When asked about the hit, Colorado coach Jared Bednar noted that it was a five-minute major penalty but that he hadn’t seen all the angles of the hit.

“The league will look at it, and then who knows?” Bednar said. “It’s hard to sometimes figure out what the league suspends guys for and what they don’t. We’ll see what they come back with.”

By the end of game, the Blues were missing two defenseman: Faulk and Robert Bortuzzo, who left the game at 9:24 of the second period after appearing to take an elbow from Colorado forward Tyson Jost.

“It’s a greasy elbow by Josty there. I understand he’s going into the battle, but you gotta know how to control your elbows and not get it up into the D-man’s face,” Schenn said. “It’s a pretty gross elbow.”

Game 3 is in St. Louis on Friday night.

NHL trade deadline 2020: Breaking down the biggest rumors, deals of the day