Home » NHL » Avalanche 6-on-3 vs. Blues: A rare situation with an unexpected result 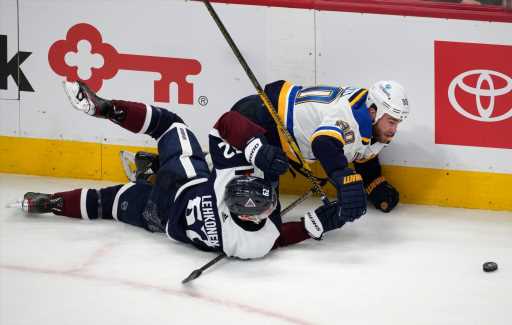 It seemed too good to be true. So good, in fact, that it’s a situation never practiced by the Avalanche.

Colorado has a 6-on-3 set that the players keep bookmarked in the second or third browser inside their brains. But it’s not a common enough circumstance to waste practice time on it.

The necessary ingredients: two sequential penalties committed by an opponent in the last two or three minutes of a close game that the Avs are trailing, already requiring them to pull the goalie.

The stars aligned for the Avalanche’s league-leading power play Monday night. But it couldn’t convert in a last-minute flurry against the division rival St. Louis Blues, ending a 3-2 loss on an agonizing note.

Local nemesis Jordan Binnington saved 45 shots for St. Louis, but he didn’t need to save a single one during the 56 seconds of 6-on-3 time after Colorado pulled goalie Alexandar Georgiev.

“We executed pretty much exactly what we wanted,” Avalanche defenseman Cale Makar said. “We hit the seams. … Just a couple of unfortunate bounces.”

It started when Justin Faulk tripped Josh Manson with 2:01 left. For all but one remaining second, Colorado would be on the power play, starting with a top unit that had already scored earlier in the period to half the deficit.

When Nathan MacKinnon won the ensuing faceoff, Georgiev could have been called to the bench, but he wasn’t immediately. Bednar was asked after the game if the advantage of a 6-on-3 can become too overwhelming in terms of open skaters, leading to over-passing and not enough shots.

“That’s why we didn’t pull him right away: We have a 5-on-3 set that we like,” Bednar said. “I don’t think so, though. Because it gives you an extra guy down on his forehand by the net is what it does. So the options you run on one side, you have them on the other side as well.”

Still, the Avs generated their best chance during the 5-on-3 portion, before pulling Georgiev. Makar released a sharp one-timer that almost beat Binnington five-hole, but he barely stopped it between his pads with 1:16 left.

Twenty seconds later, the Avalanche upped the urgency. Georgiev to the bench. Alex Newhook was the sixth skater. It had been a shaky night for the 21-year-old forward, who was demoted mid-game from the second line because he was “not playing up to the standard I have set for him,” Bednar said.

His role was dependent on where the puck was.

“He’s on the goal line on that side, so he’s an option,” Bednar said. “He can use a low play or bring it to the net. Or be an option if you’ve got to get out of a little bit of trouble. Helps on retrievals. And then if it’s shooting from the top middle, then you’ve got to try and get a screen. Be a rebounder.”

The Avalanche moved the puck around. Evan Rodrigues decided not to unleash a shot near the blue line. Nathan MacKinnon missed the target on two shots. Makar missed on one.

Top scoring options were on their last legs at this point: Makar played 29:06 of ice time, MacKinnon 23:21 and Mikko Rantanen 23:58 in an up-tempo game. “It was fast,” Makar said. “We did the right things to win that game.”

One chance remained, but Artturi Lehkonen’s shot didn’t make it through traffic.

A rare situation ended with an even rarer result: no shots on goal.

“Had a couple good opportunities. … I think E-Rod probably could have shot the other one from the middle of the ice,” Bednar said. “A couple good looks there, but that’s kind of the way our night was going. We had a lot of good looks and chances to score. We didn’t score. Missed the net probably too many times.”

On this day in sports history, Bill Mosienko made NHL history with a 21-second hat trick