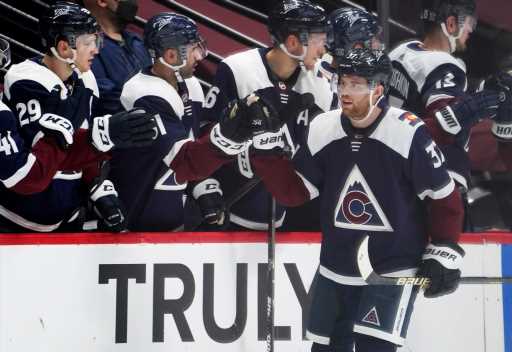 The Avalanche is taking its talents on the road, where the NHL’s hottest team plays 15 of its final 19 regular-season games. Colorado, coming off 7-1-1 and 5-0-1 homestands at Ball Arena, takes a 14-game regulation unbeaten streak (12-0-2) into Monday’s game at Minnesota.

The Avs have a league-high 17 victories and 36 points at home and are on a 12-game points streak (11-0-1). At 25-8-4, they are tied with Tampa Bay and Florida with a league-high 54 points and lead the West Division by four points over Vegas.

“We made the most of our homestand and did exactly what we needed to do — carve out points in all those games after a little bit of a rocky start,” Avs coach Jared Bednar said Monday after a morning skate at the Xcel Energy Center. “So we’re pretty happy with how that went and now the price you pay is, now you go on the road and play the bulk of your games down the stretch on the road. It’s not as taxing as years past.”

The schedule is not as taxing because there is less travel in this year’s condensed 56-game season where most games are two-game series. The Avs’ final 14 road games are in seven cities, including two visits to St. Louis. They conclude a two-game set against the Wild on Wednesday and then begin a two-game stretch at Anaheim on Friday. The only remaining single-game road stretch is April 14 at St. Louis.

Colorado isn’t thinking much about its 14-game points streak heading into Monday’s game, but just focusing on playing the way that it has during the streak.

“You obviously look at the record and we understand we’ve been playing pretty well,” Avs center Nazem Kadri said Monday. “There are always areas of your game that you can improve on and that’s what we focus on most. We’re playing some pretty good hockey and we definitely want to keep it up.”

Added Bednar: “We’re not talking too much about any streak we’re on or anything. The results come with the work that these guys have put in and their dedication to it. I think they have a strong understanding with that. Our focus, really, is to just come out tonight and try to better our last performance and try to just keep playing with winning habits and the results will take care of themselves.”

Bednar has made one change to his lineup for Monday’s game. Rookie defenseman Kyle Burroughs will step in and play on the third pairing with Jacob MacDonald. It will be Burroughs’ NHL debut. He was acquired in the offseason from the the New York Islanders in a trade for forward A.J. Greer.

Burroughs, 25, replaces Dan Renouf, who was reassigned to the AHL’s Colorado Eagles. Burroughs is a right-shooter unlike the left-shooting Renouf and the change allows MacDonald to return to his natural left side of the ice.