Avalanche goalie Darcy Kuemper met with reporters on Sunday for the first time since being poked in the eye by an errant stick in Game 3 at Nashville on May 7.

In eight days, he has improved from his right eye begin swollen shut to just a minor bruise.

“Just scary situation,” Kuemper said after a full-team practice at Ball Arena. “I didn’t know what happened until I watched it after. It just happened so quickly. Obviously, pretty scary when your eyes are involved, but I got pretty lucky that it wasn’t worse.”

Kuemper, who did not play in the final five periods of the first-round sweep over the Predators, is scheduled to start for the Avalanche in Game 1 against the St. Louis Blues on Tuesday or Wednesday at Ball Arena. The NHL will release the Round 2 schedule following Sunday night’s Game 7s in New York and Calgary.

Kuemper was struck in the eye area by the stick blade of Preds forward Ryan Johansen. In the visitor’s training room at Bridgestone Arena, Kuemper said he quickly learned he did not have a serious eye injury.

“I saw the doctor right away and he said it was more eyelid than the eye, so that was reassuring,” he said. 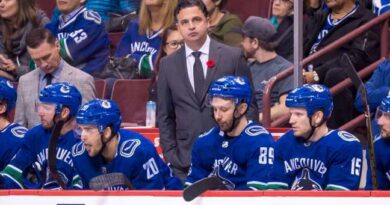 Which team is the new Stanley Cup favorite?