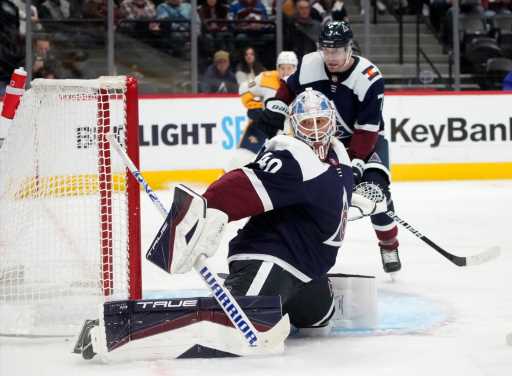 Actually, you don’t need to.

It was Georgiev’s turn again to be surrounded by microphones Saturday night underneath Capital One Arena, where he completed his ninth career shutout and first as an Avalanche goalie. Two nights earlier in Carolina, backup Pavel Francouz made 46 saves to steal the Avs an overtime win in which they only managed 15 shots of their own.

Two road games, two Avalanche wins despite being outshot. Two goalies combining for a .975 save percentage.

“We’re spoiled in that regard right now,” Avs coach Jared Bednar said. “Both guys are playing real well. We’re going to keep them both active and playing with as little rest as possible. That’s what we need. We’re running thin in other areas of our lineup and to be able to have those guys anchoring our team is really nice.”

This was supposed to be maybe the only weak spot on an otherwise intricately crafted team.

But Georgiev, with the 33rd-highest cap hit among NHL goalies ($3.4 million), is over-achieving in his first opportunity as a regular starter. He is 8-2-1 with 2.45 goals allowed per game and a .930 save percentage (.947 at even strength), ranking fourth in the NHL among goalies who have faced at least 100 shots. In sixth place? Francouz at .925.

“Unreal. Both those guys,” MacKinnon said. “I wouldn’t say they’re competing against each other. I think they’re supporting each other, and they’re just playing great hockey between the two of them. I think in this league you need two goalies to be successful. The schedule’s just too tough now. And, yeah, they look great.”

Even on a night Francouz watched from the bench as his coworker pitched a shutout, Czech reporters found him in the locker room for an interview. Pretty popular for a backup. “You’re trying to work hard on the practice,” he said. “Kind of pretend that it’s a game.”

Georgiev is meek about the chip on his shoulder, but you don’t have to look too closely to see it. He’s aware of his surroundings. Beating Igor Shesterkin and the Rangers with 44 saves was maybe just a little bit personal.

Against the Capitals, it mattered less to Georgiev that he was matching up against last year’s Avalanche starter Darcy Kuemper — “I don’t play against goalies; I play against the team,” he said — even though Kuemper is the predecessor against whom Georgiev is constantly being compared.

What mattered more were these two memories: his most recent game in Washington, and his statistics against the city’s most beloved athlete.

“I wanted to get a big game here because I think last time I played, they scored, like, five on me here,” he said.

Then there’s Ovechkin. Entering Saturday night’s matchup, the future Hall of Famer had scored eight goals against Georgiev on only 19 shots. Even after this redemptive shutout win, he has the worst save percentage against Ovechkin (.619) of any goalie who has faced him at least four times.

“No. 8 has been pretty hot against me,” Georgiev said afterward, grinning. He hadn’t been prompted about Ovechkin. “So it feels good to get a shutout today.”

It’s an ongoing pleasant surprise for Avalanche fans, too. If goalies are suddenly a strength, the league is in trouble.

Can Jared Bednar lead Avalanche to a Stanley Cup? Players from his first championship team have no doubt. – The Denver Post