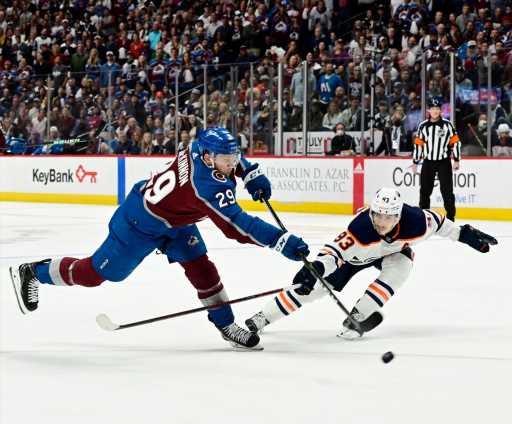 EDMONTON, Alberta — A victory in Game 3 on Saturday at Rogers Place will get the Avalanche just one win shy of advancing to the Stanley Cup Final. The Avs swept the Edmonton Oilers in Games 1 and 2 at Ball Arena and are now in a position to take a commanding 3-0 series lead in the Western Conference Finals.

Limit the Oiler stars, again. In Game 2, Avs center Nathan MacKinnon had 10 shots — three more than Edmonton’s top three forwards had combined. Thanks mostly to the play of Colorado defensemen — particularly Devon Toews and Cale Makar — Leon Draisaitl had just three shots and Connor McDavid and Evander Kane two apiece. Draisaitl and McDavid each saw their nine-game points streak end and Kane failed to score a goal for just the second time in five games. Puck possession helped the Avs limit the Oilers’ stars, and that’s a team effort, but it begins with the playmakers like MacKinnon, Toews and Makar. If they again have excellent performances in Game 3, the Avs will be in good shape.

Byram’s rise. Avalanche rookie Bo Byram is blossoming into a star. The first defenseman selected in the 2019 draft (fourth overall) logged a postseason-high 21:09 in Game 2. His ice time has risen from 18:52 to 19:25 in Games 5-6 vs St. Louis, to 20:09 in Game 1 against the Oilers. He’s playing more because he’s earned the coaching staff’s trust. Byram is paired with Erik Johnson at even strength but is getting spot-shifted with others — including top-minute leaders Toews and Makar. Byram has cemented his role at the No. 3 defenseman on this team. Limited to just 30 regular-season games because of three concussion-related setbacks, Byram is proving he can still reach his elite-level potential before his 21st birthday on June 13.

Mikko watch. Winger Mikko Rantanen had a goal and an assist in Game 2 for his second straight multiple-point game for the Avs. He appears to be out of his postseason funk and more production from him will serve Colorado well. Rantanen has built chemistry with center Nazem Kadri and fellow Finn Artturi Lehkonen. That second line — which started Game 2 — has become as dangerous as the first trio of MacKinnon, Gabe Landeskog and Valeri Nichushkin.