Home » NHL » Avalanche winning streak climbs to five games, each from a comeback: 5 takeaways from the 4-3 triumph over Seattle – The Denver Post

For the first time in club history, the Avalanche has a five-game winning streak in which each victory was the result of a comeback. Three of them came from multi-goal deficits, including Monday’s 4-3 triumph over the visiting Seattle Kraken and former goalie Philipp Grubauer.

The Kraken built a 3-1 lead late in the second period for Grubauer, who allowed the final three goals.

Success at home. The Avs extended their club-record home winning streak to 12 games. They are 13-0-1 in their last 14 games at Ball Arena and, dating to last season when Grubauer was usually in net, 30-2-2 over the last 34.

Colorado’s 12-game winning streak is the longest at home in the NHL this season and the longest since Boston won 12 straight in 2019.

Kadri nets the winner. Center Nazem Kadri completed the Avs’ three-goal rally with the game-winning goal at 14:17 of the third period. Kadri used a wrist shot from the left-wing circle dot to beat Grubauer high to the near side — between the left post and the goalie’s head.

“That’s what great teams do,” Kadri said of the Avs’ comebacks. “You got to walk before you can run. I think these types of situations, being down and staying patient, not getting frustrated, those are all traits we’ve started to develop and are making it a consistency now. Love the maturity and that’s a great sign for us.”

Kadri also had an assist for his 15th multi-point game of the season, trailing only Connor McDavid (18) and
Alex Ovechkin (16) among all NHL players.

With 46 points, Kadri is tied for fourth in league scoring behind Leon Draisaitl and McDavid, both with 53 points, and Ovechkin (52).

Depth scoring. Avs top-line left wing Gabe Landeskog was scratched after joining the NHL’s COVID protocol absence list Monday morning, and his linemates did not have much offensive success against the Kraken. Center Nathan MacKinnon and right winger Mikko Rantanen were both pointless and minus-2.

To his credit, MacKinnon had a team-high seven shots — giving him 19 in his last two games.

Taser. Toews, who goes by Taser to his teammates, scoring the overtime winner in Saturday’s 5-4 victory over the Toronto Maple Leafs and the tying goal against the Kraken. He has seven tallies on the season, tied for sixth among all NHL defensemen — despite missing the first nine games after undergoing off-season shoulder surgery.

Respect for a former player. Grubauer, who played the last three seasons for the Avs before signing with Seattle as an unrestricted free agent, heard more “Gruus” than “boos” when he made a save.

“The love and the appreciation of the support I got here; it’s been incredible,” Grubauer said. “Denver is always a special place in my heart, and especially the fans too and the people that come out, not only to see us play but to see me play. I don’t even know what to say, it feels amazing for sure. Even though we didn’t get the win, personally I can build on a game like that for sure.”

Wysh List: Your hockey week for a week when there’s no hockey 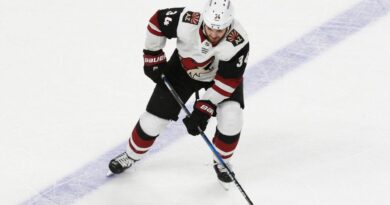