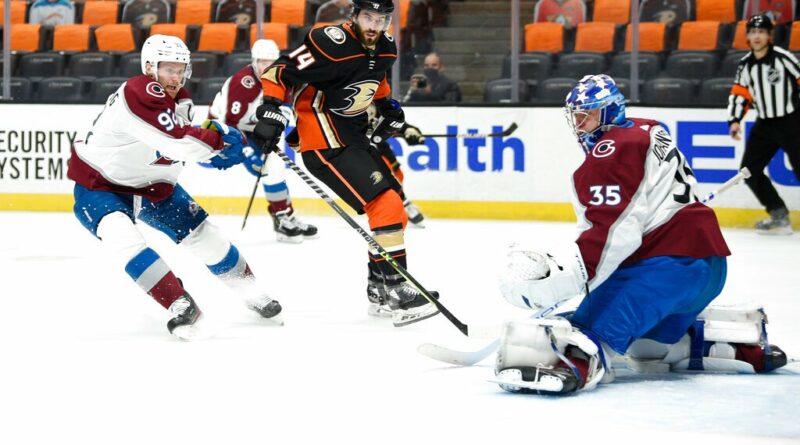 He allowed a goal on the first shot he faced in his first three Avalanche appearances this season. But backup goalie Jonas Johansson, acquired last month from Buffalo, was perfect on Friday night at Anaheim, making 28 saves as the Avs answered their biggest loss of the season with a 2-0 victory against the Ducks at Honda Center.

“It feels great,” Johansson said of his first career shutout. “Great effort by the boys tonight, helping me out. Just good stuff.”

He added: “I felt like we didn’t really have the legs tonight. We really didn’t have the passing game but we still managed to get the job done. I think that’s what good teams do.”

West Division-leading Colorado was coming off an 8-3 loss on Wednesday at Minnesota, snapping a 15-game regulation unbeaten streak (13-0-2). But Friday the Avs (27-9-4) surpassed Carolina with an NHL-leading 58 points.

Avs third-line winger Valeri Nichushkin finally broke through for the game’s first goal at 17:12 of the second period. Nichushkin one-timed a nice centering feed from defenseman Ryan Graves to cap a nice possession-laden rush by his line.

“Kind of a greasy road win. It wasn’t pretty by any means,” said Avs third-line center Tyson Jost, who assisted on the game-winning goal. “J.J. was awesome tonight. We’re pretty ecstatic for him to get his first shutout. It’s awesome. He did a great job. He was a rock back there tonight. We relied on him heavily.”

Right winger Mikko Rantanen added an empty-net goal in the final minute as the Avs tied their best record after 40 games in club history (58 points).

Colorado improved to 5-1-1 against Ducks, with the final game of the eight-game series Sunday afternoon in the same building.

“I didn’t think that we had a lot of jump tonight. It seemed like our energy was a little bit on the low side. But we did get better as the game went on and Jonas played really well in goal for us. We were able to sort of limit their scoring chances. We didn’t create a lot either. It wasn’t our most dangerous game but we find a way to get the job done. So it was a big win for us after a tough day of travel (Thursday) and coming in here and not being able to skate this morning. It didn’t look like our guys had their legs underneath them for a while but we got incrementally better.”

The Avalanche organization had a busy day Friday. Rookie defenseman Bo Byram, who has been in concussion protocol over the last seven games but practicing and traveling with the team, tested positive for COVID-19 and was added to the NHL’s COVID protocol absence list — hours after the Avs canceled their morning skate likely because of the positive test. Byram is in quarantine but the game, while in doubt in the morning, went on as planned.

“We had the one COVID positive in Bo,” Bednar said. “Obviously, if we had more positive tests it could have been a different story. There was a little bit of nervous energy around our team but we certainly wanted to play and no one else tested positive so off we went.”

Two hours before the first puck drop, the Avs announced they had re-acquired shutdown defenseman Patrik Nemeth from the Detroit Red Wings for a fourth-round draft pick in 2022. Nemeth, 29, played with the Avs for two seasons ended in 2019, before signing with the Wings as an unrestricted free agent.

Detroit will retain half of Nemeth’s $3 million cap hit and $2.8 million salary in the final year of his two-year contract. He’s considered a “rental” ahead of the playoffs and will help the Avs make up for the long-term injury absence to defenseman Erik Johnson.

“Nemo is a guy we know real well and we need some experienced D back there. He’s a guy that’s been real strong for us in the past on the penalty kill. He’s had a couple good years in Detroit. He plays a major role in his hockey team and there is certainly a spot for him on this hockey team.”

Colorado, because of $8 million in LITR relief (Johnson, $6 million, goalie Pavel Francouz, $2 million), has $5.4 million available to spend and will likely make more moves ahead on Monday’s trade deadline.

Footnotes. Avs defenseman Jacob MacDonald served the first game of his two-game suspension for a check-to-the-head in Wednesday’s loss at Minnesota. Rookie Keaton Middleton replaced MacDonald, making his NHL debut. … The Avalanche is now 2-1 on a four-game road trip and a stretch that has the club finishing the season playing 14 of its last 19 games on the road. … The Avs had their 15-game points streak (13-0-2) end Wednesday at Minnesota. It was the second-longest points streak in club history, one shy of the 2001 Stanley Cup-winning team. Colorado outscored its opponents 67-28 (plus-39) during the streak and out-shot them 591-369 (plus-222).

Maple Leafs’ deal for Jake Muzzin could lead to arms race: Who strikes next?

Top 25 NHL goaltenders in 2019-20: Ranking the best in the league, from Price to Lundqvist