It looks like Brad Marchand is a Mitch Marner fan. Either that or he’s setting himself up for a post-NHL career as an agent.

The Bruins winger responded to the NHL’s public relations account’s tweets Tuesday regarding Marner reaching the 80-point plateau in 66 or fewer games.

TWO DOWN, ONE TO GO: Maple Leafs’ attention turns to re-signing Mitch Marner

“I cant wait to see this kids new deal… 12m AAV?? It better be,” Marchand tweeted about the Maple Leafs young star. He included the hashtag #Marnerwatch.

This is why he’s the master. In one tweet Marchand:

1. Supports a fellow Canadian/NHLPA member’s contract talks.
2. Attempts to blow up a rival’s cap
3. Creates a further divide in the Marner/Matthews debate by suggesting he not take the same discount.

Bow to the master. https://t.co/MqHAmGWdsi

The tweet followed a three-point night (goal, two assists) for Marner, 21, against the Flames. Now in his third season, the 2015 first-round pick has 81 points (24 goals, 57 assists) in 66 games and is set to be a restricted free agent at the end of the season.

While general manager Kyle Dubas locked up Auston Matthews, who would have been an RFA July 1, and William Nylander, Marner’s camp has opted to not negotiate during the season.

“We’re respecting the wishes of [Marner’s agent] Darren Ferris and if they were to change their stance on it, we’re open to that,” Dubas told reporters in February, “but for right now, we’ll respect their wishes and carry on with the season here.

“When they’re ready to sit down, we’ll talk. He’s going to be a Toronto Maple Leaf for a long time regardless of how we have to come to that, so it’s no issue at all,” Dubas added.

Marchand’s negotiating skills are pretty good, and his number for Marner may not be far off. Nylander, who missed a large chunk of the season and has not produced as expected, is signed to an AAV of $6.962 million. Matthews, who has 60 points in 52 games, has an AAV of $11.634 million.

With how Marner’s season is going, he should command more.

Leading Toronto in scoring, with 16 games remaining, Marner needs 19 points to become the first Leaf since Doug Gilmour in 1993-94 to hit the 100-point mark. 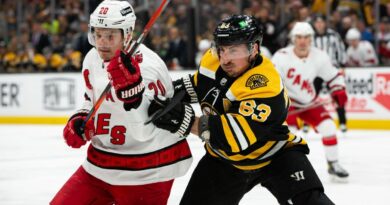