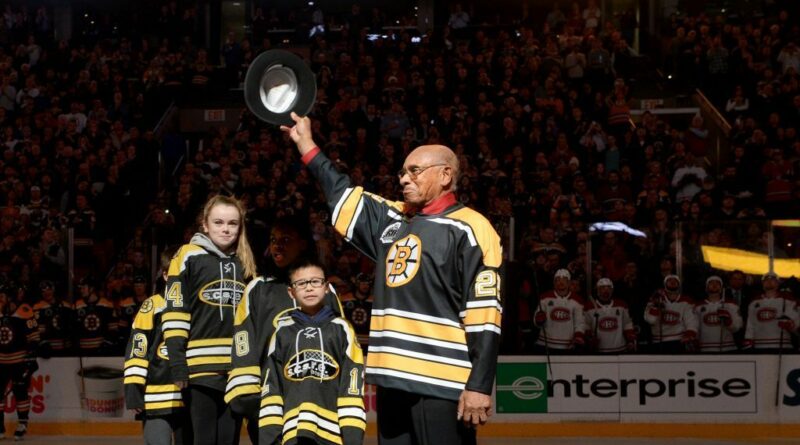 The Boston Bruins will retire Willie O’Ree’s No. 22 and raise it into the rafters this season, honoring him for being the NHL’s first Black player. The Bruins will celebrate O’Ree in a ceremony on Feb. 18 before a game against the New Jersey Devils.

O’Ree, who debuted for the Bruins 63 years ago, was inducted into the Hockey Hall of Fame under the builder category in 2018, an honor that was viewed as long overdue.

The NHL already has plans to honor O’Ree this season with helmet decals to be worn by players through the end of February, Black History Month. The decals feature O’Ree in his signature fedora, along with the words “Celebrating Equality.” Last season, there were only 43 non-white players in the NHL, which represents less than 5% of the league.

O’Ree made NHL history when he suited up for the Bruins in a game against the Montreal Canadiens on Jan, 18, 1958. The 22-year-old O’Ree was called up from the Quebec Aces as an injury replacement for Boston. He was sent back down after two games.

“When I stepped on the ice with the Bruins, it did not dawn on me that I was breaking the color barrier,” O’Ree said in his 2018 HHOF acceptance speech. “That’s how focused I was on making my dream come true. I did not realize I had made history until I read it in the paper the next day.”

O’Ree rejoined the Bruins in 1960-61 and played in 43 games that season. His final NHL stat line is 45 games, 10 goals and four assists. He played professional hockey for 21 seasons — including 13 in the WHL — before retiring in 1979. O’Ree was named the NHL’s first diversity ambassador in 1996. Since then, he has traveled across North America, promoting NHL and youth-level events, and was particularly instrumental in pushing the league’s Hockey is for Everyone program, which encourages diversity and inclusion for the sport.