Home » NHL » Charles Barkley makes fun of Wayne Gretzky NHL fight: ‘Did you lose to a guy with a perm?’

Charles Barkley is many things: A Basketball Hall of Famer, a former NBA MVP, a two-time Olympic gold medalist and, as he reminded everyone on TNT on Wednesday night, a massive hockey fan.

Barkley has talked about his fandom for the sport before numerous times, which he says began in the 80s.

As such, he was called upon to help christen TNT’s new hockey coverage — and quickly had some fun at Hockey Hall of Famer and new studio analyst Wayne Gretzky’s expense. The duo talked about Barkley’s hockey fandom, as Chuck gave the team a hearty welcome to the network.

When the conversation turned to physicality and fighting in their respective sports, Barkley quickly changed tunes to take some good-natured shots at Gretzky: “The Great One” got into only two fights in his illustrious NHL career, both of which were over 30 years ago. It wasn’t Gretzky’s fighting ability, or lack thereof, that Barkley poked fun at. It wasn’t even necessarily that Gretzky lost.

It was to whom he lost, and his hair style:

Gretzky lost said fight to Neal Broten in a 1982 game between Gretzky’s Oilers and Broten’s North Stars (then based in Minnesota and now Dallas’ team). Barkley was quick to point out Broten’s perm which, it being the ’80s, wasn’t a wholly unsurprising look. Gretzky was a good sport about it, acknowledging the humor of the situation and even adding some background information: He had just been honored as Sports Illustrated’s Sportsman of the Year earlier that day and, while in the penalty box, looked over and did the very Canadian thing, apologizing to the American Broten.

Not to worry though, as Gretzky eventually got the last word vs. Barkley during the first intermission of Wednesday’s Rangers-Capitals game on TNT.

It was teased during the pregame festivities, but once the first intermission hit, Barkley got in net and had to stop five shots from Gretzky. He opted not to use any pads, and took an unconventional approach that ultimately paid off for Gretzky:

The broadcast was TNT’s first, and the tandem of Barkley and Gretzky got rave reviews. Given Barkley’s hockey fandom and the fact he’s an integral part of the network’s coverage of the NBA, don’t be surprised to see Barkley back in the NHL studios before long. 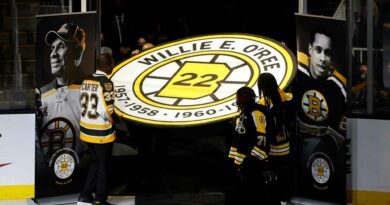 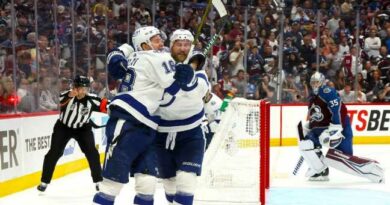