Home » NHL » Did Penguins’ Sidney Crosby get away with a dirty play against the Capitals?

Sidney Crosby has played in just two of the Penguins’ first 14 games this season. And even if he isn’t lighting up the stat sheet, he certainly made his presence known on Sunday.

In the Penguins’ 6-1 loss to the Capitals, Crosby struggled mightily. He recorded one shot on goal in just under 17 minutes of ice time, and let his frustration boil over in the third period.

After taking his lone shot on goal less than three minutes into the third period with Washington’s Martin Fehervary playing defense, the two skated behind the net where Crosby threw the young defenseman face-first into the boards.

Crosby wasn’t penalized on that play but did get sent to the box for cross-checking Evgeny Kuznetzov around seven minutes later. Tom Wilson scored on the ensuing power play to make it 6-1.

After the game, the 22-year-old Fehervary didn’t seem to pay much mind to Crosby’s actions and didn’t really have much to say on the matter.

“Yeah, I don’t know. I don’t even know what should I talk about it,” he told reporters. “I don’t care. We’ll see next game.”

Crosby has zero points, five shot attempts and has a plus/minus of -4 to kick start his 2021-22 campaign. The star center — who has already been named to Canada’s Olympic squad — missed the first seven games of the season while recovering from offseason surgery on his left wrist. He returned Oct. 30 vs. the Devils before having to enter COVID-19 protocols on Nov. 3. Sunday’s game was his first time slotting in.

The Penguins and Capitals have had some notorious and infamous battles in recent years and will next face off on Dec. 10 in Washington. 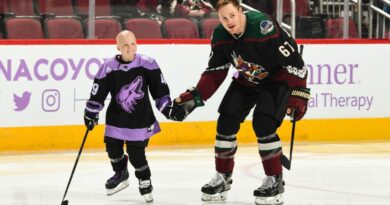