The team made this news public via a tweet as NHL training camps opened for the new season.

Kesler, 35, played in 60 games (five goals, three assists) with the Ducks last season and sat out the remainder of the year after March 6. He underwent right hip resurfacing surgery, a “bone-preserving hip replacement that can provide pain relief and increase function in normal activities of daily living” on May 9, according to the team. The Ducks noted after the surgery’s completion that Kesler could return to the ice after a “lengthy recovery,” but it had been rumored since that his recovery would keep him from playing in the upcoming NHL season, which would have been his 15th year in the league.

Anaheim acquired Kesler in a June 2014 trade that sent the 2010-2011 Selke Trophy winner to Southern California after he thrived with the Vancouver Canucks for his first 10 NHL seasons. His contract with the team expires after the 2021-22 season.

Eaves, also 35, has appeared in only nine games for Anaheim over the past two seasons due to several injuries and illness. He also spent time with the Ducks’ AHL team last season after he was placed on waivers. Eaves had spent time with four other NHL teams throughout his career and was traded to the Ducks by the Dallas Stars in February 2017. His contract expires after the upcoming season.

Both forwards will likely be placed on long-term injured reserve, which will open up just over $10 million in salary cap space for Anaheim, according to CapFriendly. and give the team space to audition younger players as the team re-tools its roster. The Ducks missed the postseason in 2018-19 for the first time since 2012.

Islanders, Lightning mix it up as New York pulls out gutsy 5-3 victory in Game 3 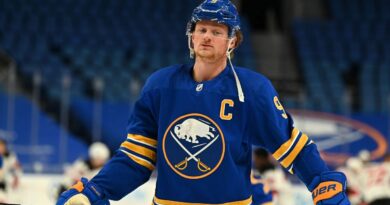