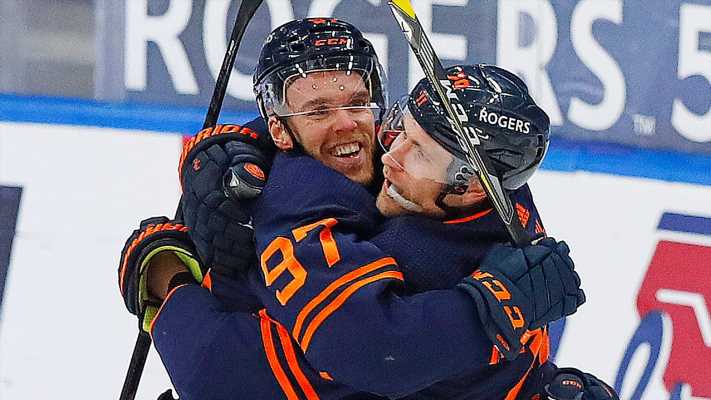 Edmonton Oilers star Connor McDavid put an exclamation point on his memorable season Saturday night when he recorded his 100th point in Game 53 of this coronavirus-shortened 56-game season.

He’s the first to hit 100 points in fewer than 56 games since the Pittsburgh Penguins’ Mario Lemieux and Jaromir Jagr did it in 1995-96.

McDavid did it with a four-point game against the Vancouver Canucks. It’s his 33rd multipoint game of the season and the 20th time he has had three points or more.

He wasted little time getting on the scoresheet, scoring a goal less than a minute into the game. McDavid then added assists on the Oilers' three second-period goals, including the primary assist on Leon Draisaitl's power-play goal in the final minute of the second that earned McDavid point No. 100 on the year.

The Hart Trophy front-runner has been playing against the same six Canadian teams all season, but the accomplishment remains notable.

The most points previously scored in a shortened season were Jagr and Eric Lindros (70) in the 48-game 1994-95 season and Martin St. Louis (60 in 48 games in 2012-13). Both of those lockout-shortened seasons were conference-only play.

“He’s been a horse for us for sure and obviously a big reason why we’ve had success this season and obviously a special talent that continues to improve, which is mind-blowing in itself,” goalie Mike Smith said before the game.