Home » NHL » From wild playoff races to the MVP chase, what to watch in the final month of the NHL season 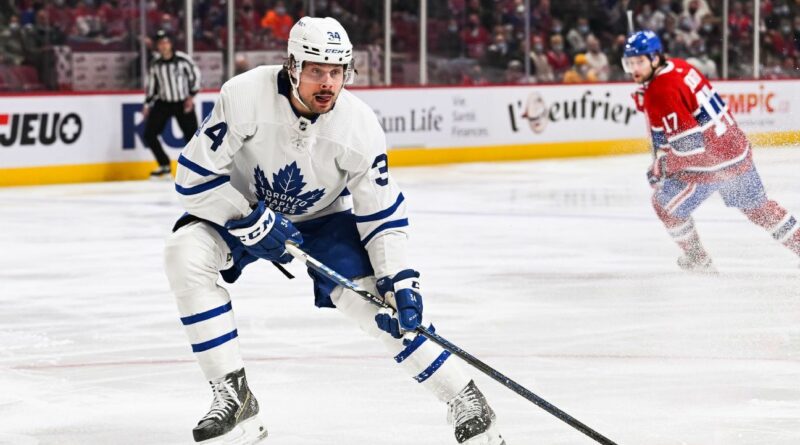 It has been two years since the NHL completed an 82-game regular season. Now, that finale is exactly one month away.

The trade deadline has also passed, leaving each of the league’s 32 teams to approach these final weeks in their own way.

Some will use it as a tune-up for the playoffs. Others are still fighting for their place in that second season.

And, well, a few might be already dreaming of next season.

Whatever the journey ahead, we’ve got you covered. Settle in for the regular-season stretch run with our primer on storylines, players, award races and future considerations to monitor.

The NHL trade deadline brought us some seriously spicy transactions.

Claude Giroux and Ben Chiarot to Florida? Brandon Hagel to Tampa? Marc-Andre Fleury to Minnesota? Take your pick. Teams went hard to acquire their targets, and now we have the honeymoon phase, in which all those heavy hitters believe the Stanley Cup is in sight.

Is it really, though?

These coming weeks will be the training ground. Yes, we know all those top-flight talents are great individually, but how will the new guys fit in? Will they elevate their squads as expected, or will some of these quickie marriages fall flat?

Take Giroux in Florida, for example. Adding the former Philadelphia Flyers captain to the top line and power play alongside the likes of Aleksander Barkov looks fantastic. But how does it feel? Is the chemistry there? The early returns have been positive; Giroux has four assists in his first three games. Can that success continue and, ideally, grow even better?

And what about Hagel with the Lightning? Tampa sold the farm to rope in the 23-year-old from Chicago, and Hagel will have to find his footing — and fast — with a tight-knit team that’s gunning for a three-peat. No pressure.

It goes beyond just the big-name trades, though. Contenders loaded up to varying degrees, all with the purpose of setting themselves apart in this next month and beyond.

The real winners and losers of trade season can only be determined on the ice and over time.

The Western Conference playoff field goes something like this:

No. 1: Colorado Avalanche
No. 2: Calgary Flames
Literally Everyone Else

Post-deadline in the West, just the Flames and Avalanche had more than 80 points. At that same juncture back East, eight teams had 80-plus points.

Where will the next month take the Western Conference?

There are maybe five teams you could say are truly out of the running for postseason seeding (sorry, Seattle; you’re going 0-1 on franchise playoff appearances). We could see a photo finish for not just second and third place by division, but also the two wild-card slots.

When it’s all said and done, we can have deep philosophical discussions about why the West was so tightly contested and why the Eastern table was set basically by December. Until then, let chaos reign, and enjoy the ride.

Dead heat in the East

Speaking of the East, in the span of a single afternoon (last Saturday), the Maple Leafs went from home-ice advantage in the first round of the playoffs to a wild-card spot.

That’s the sort of chaos the Eastern Conference is generating with a month to go, even though the eight teams making the postseason are essentially set.

However, the slate of potential playoff matchups brewing in the Eastern Conference? Chef’s kiss.

Tampa vs. Toronto? Who says no to that?

By the time you’re reading this, the decks might have shuffled again. The first-round series to come might be even better.

Unlike in the West, we know (barring any seismic meltdowns) which teams will be coming out of the East: Carolina, Pittsburgh, New York Rangers, Washington, Florida, Toronto, Boston and Tampa Bay.

But there are only about 10 points separating all of them in the standings. So where does everyone end up? How strategic do these clubs try to be while jockeying for position? All will be revealed over the next month.

Push for the Presidents’ Trophy

The Presidents’ Trophy is the most drama-free of regular-season awards. It simply goes to the team with the best overall record. Assuming there are no tiebreaker procedures involved, it’s open and shut.

This season looks like a three-team race to take the trophy among Colorado, Florida and Carolina. The Avalanche won it last year, for the third time since the award was introduced in 1985-86. Neither Florida nor Carolina have ever won.

So, what does hoisting the Presidents’ Trophy mean for a team’s playoff outlook? Some would say nothing at all. Others start crunching the numbers.

So finishing with the league’s best record is certainly no guarantee of lifting the Cup or making it deep in the playoffs.

Who has the Hart?

The Hart Trophy proves annually to be a hotly debated award.

This season? There are even more dissenting opinions than usual.

The Hart goes to the NHL’s MVP, or “the player adjudged to be the most valuable to his team.” This is where Hart-related sparring usually starts, over whether being “most valuable” also correlates to “being on a playoff-bound team.”

The Hart is about bringing value to the lineup. But how do we define value? Is value represented by the entirety of a player’s game, or can value be adequately measured only through what the player does best?

Good luck to the members of the Professional Hockey Writers Association who must figure it out this year. Because there are several Hart-worthy candidates out there, and arguments for and against each.

New York Rangers goalie Igor Shesterkin has carried his team this season, but as a goalie, he also doesn’t dress every game.

Toronto Maple Leafs forward Auston Matthews has shined offensively, but he is also surrounded by other elite talents.

Jonathan Huberdeau is a scoring machine for Florida’s top-ranked offense, but his defensive game is statistically average.

What about defensive phenom Cale Makar in Colorado? Or Captain Clutch Connor McDavid in Edmonton? Where’s the love for Nashville’s defensive anchor, Roman Josi? How about the history-in-the-making season Alex Ovechkin is producing in Washington?

If you haven’t heard, Ovechkin has been on a tear.

Here’s a recap: The 36-year-old winger is on a mission to reach Wayne Gretzky’s all-time record goal total of 894. Ovechkin’s tremendous season already put him past Jaromir Jagr for third on the list when he scored the 767th goal of his 17-year career earlier this month. Next milestone: surpassing Gordie Howe’s 801 goals to reach the second spot, and inch ever closer to Gretzky.

We’ll see where Ovechkin can get to in the final month of this year. Already, he has surpassed 40 goals for the fifth time in a season since turning 30, and for the 12th time overall, tying Gretzky for the most 40-goal seasons ever.

He has been torrid in March with 10 goals and four assists in 12 games.

Who knows how long Ovechkin will be able to keep playing, and especially to keep scoring at this level? All we know is, he’s doing it now.

Refresher: Vegas tried dealing Dadonov and his $5 million cap hit to the Anaheim Ducks on trade deadline day. The Golden Knights needed to free up cap space for players coming off long-term injured reserve — namely Mark Stone and Alec Martinez. Unfortunately, a mix-up over Dadonov’s no-trade list nullified the deal, and Vegas was back to square one.

That was quite a scary place to be. The Golden Knights needed $9.1 million in space to get Stone back, and $4.8 million in space for Martinez. There was a time, weeks ago, when some believed the Golden Knights wouldn’t activate Stone until the salary cap-free playoffs began. The problem is, Vegas needs to get into the postseason, and having Stone back would go a long way in helping the cause.

Well, to the rescue has been Dadonov. During his first game “back,” Dadonov had a goal and three points in the Golden Knights’ resounding 6-0 victory over Nashville. In his next outing, Dadonov capped off Vegas’ comeback from being down 3-0 by scoring the overtime winner against Chicago.

What a wild turn of events for Dadonov to be the catalyst that gets the Golden Knights back in playoff position, to the point where their cap struggles are suddenly less pressing.

Because it’s not like Vegas is dealing only with Stone’s absence. While Martinez was able to get back on Saturday, the Knights are still dealing with injuries to Max Pacioretty, Reilly Smith and Robin Lehner.

It’s all just a fascinating situation. Vegas ended up here in part because of the Jack Eichel trade; moving Stone to LTIR is what allowed the Golden Knights to activate Eichel after the deal. Perhaps their reality now is a cautionary tale about the perils of going all-in. Or, if it works out, Vegas will be vindicated for trying to win at all costs.

Racing for the Rocket

The Maple Leafs forward produced a league-leading 41 goals in 52 games last season to claim the first Rocket of his career. He’s now back in the lead with 48 goals.

But Matthews has also missed some time this year — most recently while serving a two-game suspension for cross-checking Rasmus Dahlin — and other skaters are gaining ground.

Edmonton’s Leon Draisaitl has made big strides in March and is now just one goal behind Matthews. He has never won a Rocket. New York’s Chris Kreider is having the best season of his career with 44 goals and would also be a first-time winner.

And, of course, there’s Ovechkin with his 42 goals.

This one should be especially tight.

For most of this season, the Shane Wright sweepstakes looked to be a two-horse race between Montreal and Arizona.

Both the Canadiens and Coyotes remain near the bottom of the standings and thus have greater lottery odds for the upcoming NHL draft, in which Wright projects to be the top pick. But Montreal and Arizona have also been much improved since February, and the gap separating them from Seattle, Ottawa and New Jersey has closed.

Montreal is meant to be hosting this year’s draft, and it would be a terrific story for it (and assembled local fans) to have the No. 1 pick announced in that building.

Conversely, by the time we get to the draft in July, will Wright still be the top prospect? And how much will that conversation change over the next few weeks as these aspiring NHL draftees finally get to attend showcases and tournaments previously canceled or postponed because of COVID-19?

Let’s just take a moment to appreciate some of the older-guard players still in the game. And ask ourselves, are we about to see some of their final games?

Zdeno Chara is 45 and playing in his 24th NHL season. He has yet to score a goal in this campaign for the New York Islanders and has, quite clearly and understandably, slowed down in all facets. The Islanders aren’t making playoffs, so these final weeks could be the last we see of the bruising blueliner.

Then there’s Joe Thornton. Yes, Florida is going to be in the postseason, but how much of the 42-year-old Thornton will we see in the Panthers’ lineup? He has skated in only 27 games all season (for various reasons), and with all the new additions Florida has brought in, who knows how much ice time Thornton will grab. Will he try for another season after this?

Both guys are legendary. Both have seemed immune (until recently) to the effects of time. As the last stretch of this regular season rolls out, fans can appreciate what greatness both have added to the league, in case there’s not much more left of it to see.