The NHL playoffs are always unpredictable, and now a variable is being tossed in — a global pandemic.

The league, which went on hiatus on March 12 because of the coronavirus, is ready to move to Phase 3 of its return when training camps open on Monday.

If all goes well, 24 teams will report to hub cities in Toronto and Edmonton, Canada, on July 26, the playoff qualifying round will start on Aug. 1 with five games, and the Stanley Cup will be awarded as late as October.

And testing, social distancing and hygiene will be the most important defensive systems to make sure it’s carried off.

How the tournament will work:

In training camps, teams will be limited to 30 skaters, plus an unlimited number of goalies. Players and other club and facility personnel were to be tested 48 hours before they arrived and then will be tested every other day. Temperature checks will be done before anyone can enter a facility.

Defenseman Alex Pietrangelo and the St. Louis Blues enter as defending Stanley Cup champions and will have a bye from the qualifying round. (Photo: Brian Fluharty, USA TODAY Sports)

If players show COVID-19 symptoms, they will self-isolate and be tested. Asymptomatic players will also self-isolate if they test positive and must have two negative tests 24 hours apart before returning.

Players also are being asked to limit their public access off-ice before heading to the hub cities to avoid the chance of exposure. The NHL last week said that 23 of 296 players tested during voluntary workouts were positive, a 5% rate. Another 12 had tested positive since March.

"You need to make your inner circle pretty darn small because what you do affects everybody else," Carolina Hurricanes forward Justin Williams said in a recent Zoom call. "That's pretty much the basis of what a team is anyway; you're only as strong as your weakest link. But at this point, your weakest link can take down your whole team."

Players have until Monday to opt out. Calgary Flames defenseman Travis Hamonic already has done so, as have the Dallas Stars' Roman Polak and Vancouver Canucks' Sven Baertschi and the Edmonton Oilers' Mike Green.

Once in the hub cities, rosters will be 31 players and teams can bring a total of 52 people. Players will get a floor of a hotel. No one can leave the hub except for a medical appointment or a family emergency. Quarantine will be required when returning.

No fans are allowed. No family can show up until the conference finals, which will be held in Edmonton. Media interaction with players and coaches will be by Zoom. There will be daily testing for players.

"One positive test shouldn’t shut down the tournament, but obviously we have to be very cognizant of player heath and safety and if we have an outbreak situation, that turns into a different judgment," Daly said. "But there’s no hard and fast numbers on that. That’s more of a sense of the medical professionals, and we’ll take our lead from them.”

On the ice, four bye teams will play a round robin to determine seeding at the top of each conference, while the remaining eight teams per conference will play a best-of-five series.

SCHEDULE: Dates for the qualifying round, round-robin play

Teams will be reseeded after the qualifying round, and the first round will begin Aug. 11. The second round tentatively will start Aug. 25, the conference finals Sept. 8 and the Stanley Cup Final on Sept. 22.

NHL Players' Association executive director Donald Fehr says he believes players will adjust to the unusual situation because they're professionals.

"They adapt to whatever the world throws at them: a new coach, an injury  … a new opportunity, an illness, whatever it is," he said on the joint call with the NHL. "So will it be a challenge? Sure. Will it be different? Of course. Will the players in the long run have any difficulty handling it? No?"

The draft will then be held Oct. 9-10, around the time the next season usually starts. NHL commissioner Gary Bettman says he still plans to have a full 2020-21 season, even if it has to run later than usual.

Video of the day

The NHL is taking precautions in a bid to keep alive the tradition of awarding the Stanley Cup. It only hasn't been done in 1919 (during a pandemic) and 2005, when the season was canceled because of a lockout.

So here's a video from last year's presentation to the Blues.

No word on whether there will be a social-distancing version of the Cup presentation.

Medical experts: Plan for conference-only football has merit, is step in right direction

MLB's Mask Culture:Some baseball players may wear them during games

From Mexico City to Cincinnati: Tommie Smith reflects on time with Bengals

LeBron James: Why he won't wear message on his jersey during the NBA restart

The MLS is Back Tournament continues with three games. Toronto takes on DC United at 9 a.m. ET on ESPN2 while Sporting Kansas City plays Minnesota United at 8 p.m. and Real Salt Lake faces the Colorado Rapids at 10:30. The last two games are on ESPN.

The final round of the PGA Tour's Workday Charity Open airs at 3 p.m. on CBS. 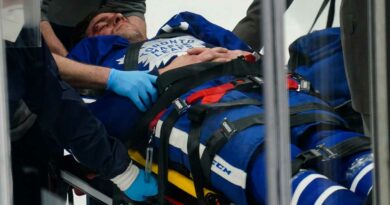