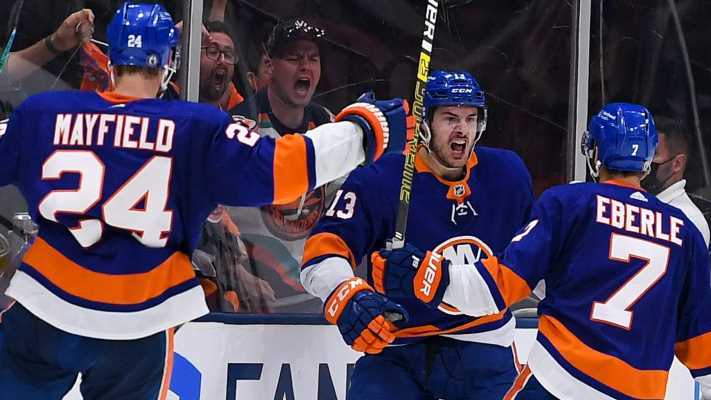 UNIONDALE, N.Y. – This barn hasn’t seen its last hockey. That much is a guarantee for the Nassau Coliseum, where the New York Islanders defeated the Boston Bruins 4-1 on Saturday in Game 4 of their second-round series.

By evening the series 2-2, the Islanders ensured that Game 6 will be played here Wednesday, regardless of the outcome of Game 5 Monday night in Boston. Had the Islanders fallen Saturday, there was a chance that this building would have seen its last professional hockey. The Islanders will move to a new arena in Elmont, New York, starting next season.

[email protected]_97 with the go-ahead goal in the third period! #StanleyCuppic.twitter.com/Vzw7LbKs3g

A period earlier, he had been on the receiving end of a cheap shot from Bruins forward David Krejci during a chippy game that featured several skirmishes and fisticuffs.

Barzal had cross-checked Krejci several times before the Bruins player reacted at 11:16 of the second period by using his stick to, seemingly on purpose, hit Barzal in the groin.

The referees originally whistled Krejci for a major but switched it to a two-minute slashing minor after a review.

Krejci spears Barzal. It’s called as a major and reviewed, but becomes a slashing minor. pic.twitter.com/iWbywD6rXg

Krejci had started the game’s scoring with a second-period, power-play goal. The Islanders answered quickly, with Barzal finding Kyle Palmieri in front of the net for the equalizer.

Empty-net goals from Casey Cizikas and Jean-Gabriel Pageau cemented the victory for the Islanders, who got 28 saves from goalie Semyon Varlamov. Boston's Tuukka Rask finished with 30 saves.

Washington Capitals star Alex Ovechkin received a fine of $5,000 for a similar play as Krejci's earlier this season.

NHL predictions: Who will win the first round of the playoffs?