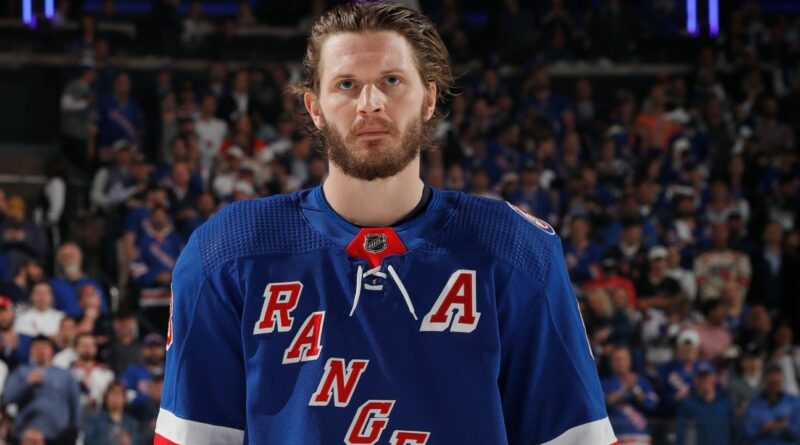 Many NHL fans do, as they watch the New York Rangers defenseman pulverize opponents with his signature open-ice checks, sometimes with injurious results. They call for penalties that aren’t whistled. They call for suspensions that aren’t handed out. They boo him when he touches the puck on the road, which Trouba claims he doesn’t hear.

Well, with one exception.

“I heard them in Pittsburgh,” he admitted. “I don’t really think too much about it, I guess. It’s the way I’ve always played.”

Trouba’s hit on Penguins star Sidney Crosby, which took the latter out of Game 5 and then had him miss Game 6 of their first-round series, changed the trajectory of the Rangers’ postseason. His hits on Max Domi and Seth Jarvis in the second round against the Carolina Hurricanes altered two critical games that ended up as New York victories.

“It seems like he could turn the tide for us when we need it. There were maybe one or two big ones that everyone kind of sees, but there are many more that wear guys down,” Rangers defenseman Adam Fox said. “It takes a toll on teams. It’s not something that’s going to come up on every box score.”

It might not make the box score, but it surfaces on social media in real time, with opposing fans blasting the hits, and Rangers fans affectionately referring to the act as getting “Trouba’d.” In postgame discourse, opposing coaches have inferred that Trouba intended to injure his opponents.

“I guess I don’t pay much attention to the outside narrative. My Twitter does,” Trouba said, with a smile. “You get inside the [dressing] room and you’re just another person on the team.”

He skates nearly 25 minutes per game and contributes occasional offense, while delivering those catastrophic checks. New York center Kevin Rooney called him a “special” player for the Rangers for the totality of his game.

“Troubs has been such a leader on and off the ice for our group,” he said. “And when you’ve got the other team thinking a little bit, that’s always good for us.”

Or as Rangers forward Chris Kreider put it: “Another player I’m happy to play with and not against.”

When discussing Trouba, Rangers general manager Chris Drury evoked the name of Adam Foote, a former teammate of his with the Colorado Avalanche and one of the most physical defensemen of his day.

“He comes to play hard. A little bit of a throwback. There’s really no nonsense to him, day in and day out,” Drury said.

Rangers coach Gerard Gallant went with another throwback player: Hockey Hall of Famer Scott Stevens, whose injurious hits were lauded in his day but would be demonized by today’s player safety standards.

“Scott Stevens comes up for me all the time. When you’re on the ice, you’ve gotta keep your head up,” Gallant said.

The hit on Crosby was the turning point in the Rangers’ first-round elimination of Pittsburgh. They trailed 3-1 in the series. They trailed 2-0 in the second period of Game 5. Crosby intercepted a clearing attempt near the slot. As he lunged to control the puck, Trouba skated through him, dropping Crosby to the ice. The Penguins star took two additional shifts before leaving the game.

“As great a player as Sid is, he does a lot of twisting and turning and spinning away from guys,” Gallant said. “Troubs went to play the puck, and his elbow got up a little high on him. There was no intent. He wasn’t trying to hurt anybody. Wasn’t running people through the glass, that’s for sure.”

Pittsburgh coach Mike Sullivan disagreed, inferring that there was intent to injure on the part of Trouba. The NHL Department of Player Safety ruled there wasn’t any intent and opted not to punish him.

The Rangers rallied to win that game. With Crosby out, they won Game 6. Crosby came back in Game 7, though not nearly as effective as he was earlier in the series, and the Rangers eliminated the Penguins.

Trouba delivered a pair of game-altering hits in the series against the Hurricanes. In Game 4, with the Rangers trailing 2-1 in the series, he laid out Domi as the Carolina forward appeared to lose an edge. The on-ice officials didn’t believe the hit — which looked catastrophic at full speed — warranted a penalty.

Carolina forward Steven Lorentz believed the hit warranted vengeance and jumped Trouba for a fight. The instigator penalty proved costly, as the Rangers scored on the ensuing power play, eventually knotting the series.

“That’s on me. It’s hard. You’ve got to make a decision, split-second. The game is so fast and I thought I was doing the right thing, but unfortunately I ended up costing our team, so that’s on me,” Lorentz said after the game.

Andrew Copp of the Rangers called Trouba’s hit the “biggest play of the game.” Defenseman Justin Braun respected Trouba’s response to Lorentz going after him.

“His response after that gets the guys going. He may be one of the best right now at the timing of those hits. Catching guys. You have to know when he’s out there. If you don’t, you’ll be in trouble,” Braun said.

In Game 7, Trouba struck again. Jarvis, a rookie and a key offensive player for the Hurricanes, moved the puck in the attacking zone. About a second later, Trouba plowed through him with a hard but legal hit. Jarvis left the game at 7:10 of the first period, after just three shifts. The Rangers would win the game in a rout and hand Carolina its only home loss of the playoffs.

The hits on Crosby and Jarvis are reminders that hockey is an inherently injurious sport, even if physical plays are made within the boundaries of the rulebook. For all the rock them, sock them highlight-reel hitting that Trouba has done in the playoffs, there is someone on the receiving end that can suffer in the aftermath.

Crosby had a head injury. ESPN’s Emily Kaplan reported Crosby was out with a concussion. Crosby’s agent Pat Brisson later told Kaplan that “the word concussion can be used loosely, but head injuries are very serious,” and that “the Penguins are being very careful and very smart.”

Jarvis said after the Rangers series that he suffered significant memory loss after the Trouba hit.

Criticism of Trouba would be tidier if these hits had warranted penalties. They did not. In fact, the same referee worked all three of these games involving Trouba hits: Wes McCauley, who was voted the best on-ice official in the league by the NHLPA in 2018.

It would also be easier to call Trouba a headhunter if these hits warranted supplemental discipline from the NHL Department of Player Safety. Not only was Trouba not fined or suspended, a source tells ESPN that he wasn’t even given warnings that his hits were on the border of illegality.

He’s been suspended once by the NHL, getting two games for a hit to the head of then-Ottawa Senators winger Mark Stone in 2016-17. But nothing after that.

“Jacob’s a clean hockey player who plays a hard game. He plays a good honest game,” Gallant said. “He’s not trying to hurt people out there.”

Trouba was born in Rochester, Michigan, in February 1994. Those picturing a young player emulating Scott Stevens have the wrong picture.

“You guys are going to be disappointed to hear this, but I didn’t watch a ton of hockey growing up. I was more of a [Nicklas] Lidstrom, Red Wings guy in my backyard,” said Trouba, citing the antithesis of booming hit defensemen.

He joined the U.S. national development team in 2010. The Winnipeg Jets drafted him No. 9 overall in 2012. He spent a season at the University of Michigan before joining the Jets in the 2013-14 season. He played 408 games with the franchise.

He requested a trade after this third season with the Jets, unhappy with his place on the depth chart. Yet he signed a two-year deal in November 2016 to remain in Winnipeg. He was a restricted free agent in 2018 when GM Kevin Cheveldayoff told him he would be traded that summer. Trouba wanted to play for an American team, in a place that would be more geographically advantageous to his relationship with partner Kelly Tyson, who was in medical school in Florida.

He was traded to the Rangers in June 2019 for a first-round pick in the 2019 draft and defenseman Neal Pionk. He signed a seven-year, $56 million contract after the trade.

Trouba’s three seasons in New York weren’t universally praised. The promise of his 50-point season with the Jets in 2018-19 turned out to be anomalous — he’s yet to break a one point-per-60 minutes scoring pace with the Rangers, although he’s chipped in a bit offensively, with 78 points in 189 games.

“He’s so consistent. Been our most consistent player all year with how hard he plays. He’s getting to his game, establishing that D-zone. Calms down the back end,” Kreider said.

It’s his physicality that has remained the most constant: His open-ice hits in which he skates with speed while keeping his body compact. In addition to making his name a verb, Rangers fans have referred to opponents getting hit by the “Trouba Train,” and the visual isn’t all that inaccurate.

Tampa Bay Lightning coach Jon Cooper is watching his players skate hazardous frozen waters against Trouba in the Eastern Conference finals. He’s seen Trouba play this way for years, and even coached him at the World Cup of Hockey on the fabled Team North America. He saw Trouba hit Jarvis in Game 7 while waiting to see whom the Lightning would play in the third round. He called it an “unfortunate result” and that no one, “including Trouba,” wants to see it happen to a fellow player.

“Everybody’s well aware of guys that can hit you. Going into a corner with Trouba versus someone else on their team, you probably have a little bit different mindset,” Cooper said. “He’s been a heck of a player in this league and a physical presence. And you do need that on teams that advance, and he’s one of the guys that does it.”

The Rangers have now advanced further than nearly anyone assumed they could go — six victories away from the Stanley Cup. Win or lose, the 2022 Stanley Cup playoffs will be remembered as an impactful one for New York, thanks in no small part to the impact Trouba has made on opponents.

“I don’t think anyone likes to get hit. Especially by someone like him,” Fox said.