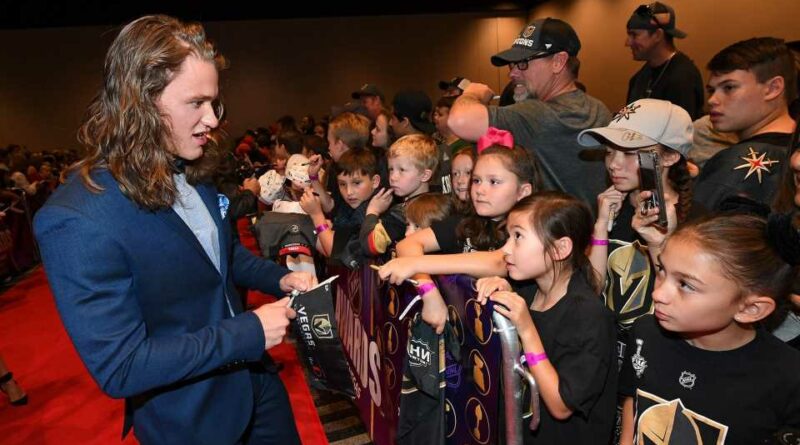 Jim Playfair has been around the game of hockey for his entire life. He played 21 NHL games over nine pro hockey seasons before stepping behind the bench to become a coach. After stints in the minors and with the Flames, he is now a part of Dave Tippett’s staff with the Oilers.

But while you may think Playfair is the most recognizable face in his family of five — wife Roxanne and sons Dylan, Jackson and Austyn — think again.

“On TV timeouts, [referees and linesmen] just skate over, and be like: ‘Is that your kid in ‘Letterkenny?’ And I’m like ‘yeah,'” said the dad, who is equally proud of all his boys, in a phone chat with Sporting News. “They’ll blurt something out about it or they’ll skate by and blurt something out [from the show]. … The players eventually start laughing and then our guys will say a line or a linesman will say a line.”

Even Playfair’s own players love the show.

“I met him after one of our practices. I think it was at the beginning of last season and it was kind of funny because you see Dylan on ‘Letterkenny’ … and I totally didn’t even know that Dylan was Playfair’s son, so it was kind of funny. He just introduced me to Dylan and we had a good little conversation,” Oilers defenseman Ethan Bear told Sporting News, noting that the pair have stayed in touch and Dylan even offered advice when Bear was working out his new contract recently. “Everyone went for a walk around the dressing room and then in the dressing room, he kind of did like — because I just freshly cracked the squad as a rookie — he kind of went into character and did a good, nice little video for me and congratulating me, so it was a pretty cool experience.”

If you don’t know the show “Letterkenny,” well, pitter-patter. Playfair’s oldest son Dylan is one of the stars of the critically-acclaimed Canadian comedy that focuses on the fictional town of Letterkenny, its 5,000 people and their problems. And while you may think that the apple fell far from the tree here — with Jim and his brother Larry being notable NHL guys and Dylan working as an actor — it only was slightly nudged away.

You see, while he’s appeared in dramas, sci-fi flicks, comedies and musicals, the younger Playfair has not traveled far from the rink.

He has played real-life characters from Gordie Howe’s son, Marty, in “Mr. Hockey: The Gordie Howe Story,” to Dean Hunter, an American trying to continue his hockey dreams in Europe in “Odd Man Rush.” But it’s his role on “Letterkenny” as a star hockey player that everyone around the game knows — and soon, he’ll garner attention as everyone’s favorite hockey team’s coach when Disney+ releases “The Mighty Ducks: Game Changers.”

“Our childhood toys were cut off sticks and tape balls and old hockey socks. That’s what we played with, and on the VHS, it was ‘Mighty Ducks 1, 2 and 3’ on repeat followed by ‘Rock ‘Em, Sock ‘Em.’ That was my childhood,” said the younger Playfair, who noted that his favorite player growing up was P.J. Stock and calls his role alongside Emilio Estevez a dream come true. “To be able to come back and be a part of that series, again, another one of those kinds of times where you’re on set going, like, I can’t believe this job. This is too cool.”

While playing Junior A in British Columbia with Merritt (BCHL) (he also had a year in Junior B with Penticton of the KIJHL under his belt) Playfair began shifting to acting, something he always wanted to do. He got his “Letterkenny” break via — what else — beer league hockey after meeting Jared Keeso, the creator of “Letterkenny,” on a film set in Vancouver. The duo played hockey together (along with most of the actors now on the show) and one of the guys suggested Playfair and Andrew Herr (Jonesy) do a skit as hockey players back when it was shorts on YouTube called “Letterkenny Problems.”

The rest is history.

“I’ve met so many versions of Reilly [my character on “Letterkenny”] and Jonesy playing hockey. That’s why I’m able to play those guys. Especially when it comes to the hockey vernacular,” said Dylan, who offered up that the fast-talking, hockey-lingo-heavy chatter is 97 percent scripted while some of the hockey scenes are just shooing scrimmages with a few intended results. “We’ve talked to people who don’t play or watch hockey, and they’re like, ‘What are you guys saying? What are those words?’ And hockey players know what it is like, ‘Oh, yeah, like bardownski, ferda, high hard ones.’ All that stuff is what happens in a hockey dressing room.

“When it comes to the actual energy of what’s happening on a bench, like for ‘Mighty Ducks,’ … just knowing the things that every coach yells behind the bench and every coach says in between periods and that energy of how they carry themselves in different times of the game. That’s the kind of stuff … that’s definitely been really advantageous in my career.”

Not only has it been advantageous to his career, but his experience as a rink rat has seeped into his role preparation. He looks at auditions like tryouts: coaches are trying to fill roles and he needs to figure out what can he do to stand out. Or, if not selected, looking at it from the point of view that it wasn’t that he wasn’t good enough, but rather they didn’t need him for that specific role.

“Having a father who is an NHL coach and was moving up through the ranks from the time I was born … it was always drilled into us that it’s not what you do when people are watching that counts, it’s the work and the time and the discipline that you put in before you get on the ice,” Playfair said. “[In acting it] boils down to memorizing your lines, reading the script multiple times, understanding exactly why your character is in that story.

“Sidney Crosby is the first guy on the ice and the last guy, and he loves the game of hockey and watches tape and practices all the time. And it’s not a secret formula as to how these guys become successful. They have a passion, and it’s not work for them. It’s not like, ‘Aw, geez, I have to go to the rink today. I have to go practice, this sucks.’ That’s what they want to be doing. And for me, that’s what acting is.”

Dylan Playfair definitely has a passion for the game of acting and notes that he’s more confident in his skills on the stage versus the ice. At the rink, he felt he needed to prove his skill-level because his dad was an ex-NHLer; now he’s on less icy ground. He’s there because he’s good at what he does. And speaking of the elder Playfair, considering some of the roles Dylan has gotten, you’d think he’d lean on his dad, who has been a coach for the majority of Dylan’s life, for some tips. While the younger Playfair may sneak in some of his dad’s style when behind the bench as Coach T (side note: he may be coaching the Mighty Ducks but, if you’ve seen the teaser, they’re the 2021 comparison of Iceland), that’s as far as the coaching tips go.

“Never one time [did he] ever asked me one piece of advice about playing a coach. And I think that’s kind of cool,” said the proud pop. “I think he’s a good pro. …. I’m excited. I’m looking forward to seeing the ‘Mighty Ducks’ stuff, see how that all played out on the coaching part of it. My wife Roxanne, we’ll watch ‘Letterkenny’ or something else … and we’ll both just kind of start laughing going: ‘That’s crazy, that Dylan’s up there doing that.’ So, that’s part of the fun … to enjoy and watch the fact that he’s an entertainer and people are being entertained from it.”

The kid from Fort St. James, B.C., who now makes Vancouver home, is a massive fan of Tom Hanks and Connor McDavid (“He’s in another league. There’s a couple of guys in the show right now that are just, yeah, I don’t know what they ate when they were babies but, by God, I wish I had some of that.”). He’s may say he’s a mixture of a grinder and a finesse player, but he’s quickly becoming a certified beautician in the acting world.

“Even though it’s the job and its work, like acting and professional hockey, it should still be fun. I think any job should be fun, it should be a part of it that you genuinely enjoy … whether it’s hockey or accounting or reporting — whatever you do, you want to have joy in it.”