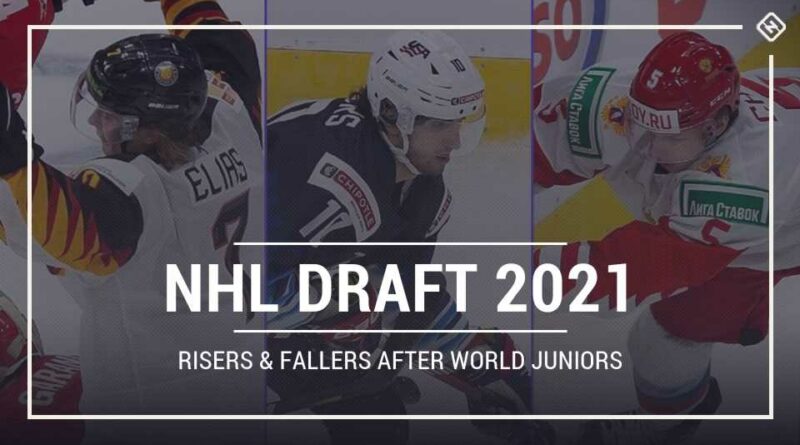 The IIHF World Junior Championship is one of the biggest stages in hockey as the best under-20 prospects go head-to-head over the holidays battling for international glory.

For some of these players, it’s also a platform to show off their skill ahead of the upcoming NHL Draft. Every year, we see draft-eligible players stand out on their teams and among their peers and last year’s edition is proof of this.

Alexis Lafrenière, the eventual No. 1 pick in the 2020 NHL Draft, dominated the tournament and helped lead Team Canada to the gold medal, winning MVP along the way. The German trio of Tim Stuetzle, John-Jason Peterka and Lukas Reichel became the talk of the prospect world while the Swedish pair of Lucas Raymond and Alexander Holtz showed off their skills in big ways.

At the same time, Russian netminder Yaroslav Askarov struggled and eventual No. 2 pick Quinton Byfield had just one point.

It’s important to keep in mind that one tournament doesn’t make or break a prospect. This tournament is simply one data point along a long hockey timeline.

Looking at the 2021 World Juniors, we didn’t see a Lafrenière-style performance from a draft-eligible player, but we did see numerous players prove why they are highly regarded ahead of the upcoming draft. Others showed some flags in their games that will be worth additional looks moving forward and a few just didn’t meet the expectations that were set heading into the tournament.

With this in mind, let’s take a look at five draft-eligible standouts and four players whose stock may have taken a hit over the course of the 2021 IIHF World Junior Championship.

Out of all draft-eligible players in this tournament, you’d be hard-pressed to find one that stood out more than Beniers. The youngest player on Team USA played top-six minutes between Canadiens prospect Cole Caufield and Wild prospect Matthew Boldy and not only kept pace with the two but often drove the play.

The University of Michigan star played all seven games recording one goal and two assists en route to the team’s gold-medal victory over Canada. He was put out in crucial moments of games to shut down opponents, was a beast in transition and wasn’t afraid to get physical. He was extremely strong in his possession, maintaining a 56.4 Corsi For percentage (CF%) through the tournament.

Beniers came into this tournament as a player on the rise thanks to an impressive start to his NCAA career and that continued in a big way with international eyes seeing just how promising a player he is. The centerman is looking like a top-5 pick in the 2021 NHL Draft.

Elias, who was eligible but went unselected in the 2020 draft, truly impressed in this year’s tournament playing on the top line between Stuetzle and Peterka. At first glance, you might think that the overager was just benefitting from playing on a line with two of the top players at the 2021 IIHF World Junior Championship. To an extent maybe. Looking closer though, he contributed in his own way to the success of that top line.

He collected at least one point in each of his five games, racking up four goals and five assists for nine points; three of those assists were primary. The Adler Mannheim (DEL) forward played on both the power play and the penalty kill, won 59 percent of his puck battles and averaged 5.4 takeaways a game. He also steadily improved his passing in the tournament, from a 69 percent accuracy in the opener against Canada to a 93 percent rate against the Russians in the quarterfinals.

After being passed over in 2020, Elias has put himself on the map for 2021. The 18-year-old led the DNL (Germany’s junior development league) in goals last season and will look to continue that success in Germany’s top league.

Coming into world juniors, many had the Finnish net locked for Penguins prospect Joel Blomqvist — that wasn’t the case. Instead, Finland seemed to be between Piiroinen and Roope Taponen. They split the exhibition game versus the United States and then each played a game. From there on out, it was Piiroinen’s net.

After a 5-3 win against Germany in the opener, Piiroinen shut out Slovakia, made 36 saves against Canada and, after giving up two goals in the first period against Sweden in the quarterfinals, shut the door and backstopped the team to a 3-2 win. In the semifinal against Team USA, he let in four goals on 26 shots. But less than 24 hours later, to put the cherry on top for his tournament, he denied 28 of Russia’s 29 shots to securing the bronze for Finland. He finished the tournament with a .915 save percentage and 2.18 goals-against average.

Piiroinen was a big reason the Finns made it to that bronze-medal game, making some big saves when it mattered most. He’s been impressing in Finland this season in the Mestis (on loan) with TUTO Hockey posting a 7-2-5 record with a .924 save percentage and 2.26 goals-against average. The Finn might be worth a look in the later rounds of the 2021 draft.

Svozil was a name draft pundits already knew well. The smooth-skating defenseman is labeled one of the best defenders in a class full of young promising blueliners and on the international stage, he proved why.

While he had just one assist in five games, Svozil put on display what makes him such an intriguing prospect: his feet and his instinct. The young defenseman’s ability to read the play and jump into action without a moment’s hesitation was extremely impressive. His vision to find lanes into the zone stood out and his excellent acceleration helped him exploit them.

He played an average of 16:48 for the Czech Republic, despite not seeing much time on special teams. Svozil was already in first-round consideration coming into the world juniors and this outing showed why.

He may not have played a big part in Sweden’s world juniors run with head coach Joel Ronnmark opting to go with Lightning prospect Hugo Alnefelt, but Wallstedt made it count when given the chance.

Playing against a dangerous Russia in his first and only start of the tournament, the Swedish netminder faced 35 shots, making 31 saves. The next night, the Swedes turned back to Alnefelt against the eventual golden Americans. After letting in four goals, Wallstedt was thrown back in the net for the remaining 36:06 of the game, stopping all 17 shots he faced. With just 99 minutes of action, he held a .923 save percentage.

The top goaltending prospect in 2021 looked very calm and collected in both games. On another note, the young netminder showed what he can do with the puck, attempting 21 passes and completing 20 of them for a 95.2 percent accuracy rate. In a tournament full of goalies mishandling the puck, the youngest one participating showed the others how it’s done.

Becar may not be a well-known name in the 2021 draft, and after a quiet world juniors performance, that won’t change any time soon. The defenseman had zero points and didn’t make an overall positive impact with his defensive play.

Throughout the 2021 edition, the defender made some questionable decisions with the puck resulting in scoring chances against or even goals against. In the match versus Germany, his lack of reaction time resulted in a goal bouncing off of him and into his own net. That game eventually went to overtime, and Becar was not only out for the goal against but attempted what appeared to be a two-pad stack to block a shot rather than attack the puck carrier. The game-winning goal was scored seconds later.

Playing in the Slovakia2 and Slovakia U20 leagues this season, he’s not likely to gain a ton of traction for the draft. This was his chance to get his name out there and with minimal impact for his team, he failed to do that.

Switzerland’s Canonica came into this tournament with quite a bit of hype around him, especially after looking good in the U20 exhibition games and collecting three points in four games. While the Swiss weren’t expected to make much noise in the tournament, more was expected from the young forward who collected just one assist in four games and was fairly quiet throughout the tournament.

Despite receiving time on the power play, Canonica’s shot total in each game decreased — from three versus Slovakia in Game 1, down to just one in each of his last two contests against Canada and Germany. He took a few poor penalties and simply looked out of place at times on the ice, especially when facing off against the strong Canadian and Finnish teams.

Canonica has been playing overseas in the Swiss U20-Elit league until he can join the QMJHL’s Shawinigan Cataractes. Coming to North America, playing with more eyes on him, could give the prospect a chance to raise his draft stock as the July draft draws closer.

The most notable name among the fallers on this list is Chayka. The Russian defender entered the 2020-21 season looking like a first-round pick, but his play at the 2021 IIHF World Juniors did not help back that up. Chayka not only finished the tournament without a single point, but he was also scratched for one game. He had a chance — and the expectation — to be one of the more steady, reliable defenders on the Russia team, but instead often looked outmatched and a little lost on the ice.

The rearguard saw his time drastically drop after the first game of the tournament, especially after being outplayed by fellow 2021-eligible Kirill Kirsanov in the first few games (who also had some struggles as the tournament wore on). He played just under three minutes in the overtime game against Sweden and under 12 minutes in the following two.

Chayka impressed in the OHL last season and while he has seen some time in the KHL this year, he’s had a quiet campaign overall. His first-round consideration may be in jeopardy if he can’t pick up his game in the back-half of the season.

Rafkin had a tough tournament, especially since he played just one game. In that contest, a 4-1 win versus Switzerland, he played just one minute and 54 seconds. Even in the exhibition game against Team USA, he only saw five minutes of ice time.

The Finnish defender was one of the more surprising players to not hear his name called in the 2020 draft. While the tournament could have been an opportunity to prove doubters wrong, he didn’t get a chance to do so after not being able to break into the lineup.

While Rafkin could still be a re-entry candidate to keep an eye on in 2021, the world juniors certainly didn’t help his case.

Josh Bell is a scout and the director of content for FCHockey.