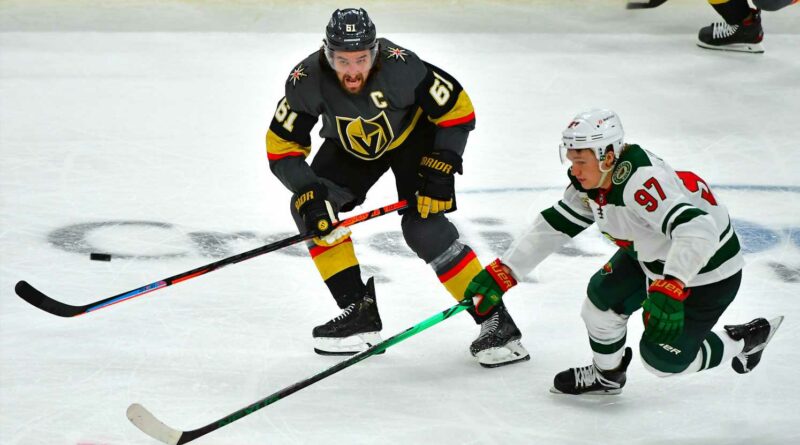 During the Minnesota Wild's first playoff appearance in 2003, they became the first team to overcome a 3-1 series deficit twice in one postseason.

Friday, they'll try for a third successful rally when they visit Las Vegas in Game 7. The Golden Knights will be ready.

"It’s an exciting opportunity," said forward Reilly Smith. "Our fans are definitely going to be full of energy and they’re going to be pretty loud. Let’s make the most of it."

Vegas was 21-5-2 at home during the regular season, but Minnesota has gone 2-1 there in the playoffs.

This is the third consecutive postseason that the Golden Knights have been pushed to a Game 7 after holding a 3-1 series lead. They beat the Vancouver Canucks last season in the Edmonton bubble. In 2019, the San Jose Sharks overcame a 3-0 deficit to win Game 7 after a controversial five-minute major to Cody Eakin.

Mark Stone and the Vegas Golden Knights have home ice as they host Kirill Kaprizov and the Minnesota Wild in the first Game 7 of the 2021 NHL playoffs. (Photo: Stephen R. Sylvanie, USA TODAY Sports)

Who will win this Game 7? USA TODAY Sports NHL staffers weigh in:

Minnesota has given Vegas a tougher time than I predicted and goalie Cam Talbot has been masterful at times, but this is when I will lean on some of hockey’s biggest clichés when determining the winner. The Golden Knights will use their home crowd — 21-5-2 record during regular season, though one win at home in this series — and Marc-Andre Fleury, their netminder with 144 playoff starts, to eke out this series win.

Vegas coach Peter DeBoer is 5-0 all-time in Game 7. Last year looked desperate, too, because the Golden Knights couldn't solve the Canucks' Thatcher Demko. But they got a goal past him, plus two empty-netters. Golden Knights forward Max Pacioretty is a game-time decision. It would be helpful if he could play.

Blowing leads is becoming a disturbing trend for this young Golden Knights franchise, but I picked VGK to win in seven before the series and I'm going to stick with it. Marc-Andre Fleury wasn't at his best the past two games as the Wild climbed back into the series, but I expect a return to the form he's flashed all year in what should be a tough Vegas environment.

What TV channel is Germany vs. USA on? Schedule, time for World Juniors 2020 game

Blues vs. Bruins: Live updates, highlights from Game 5 of the 2019 Stanley Cup Final