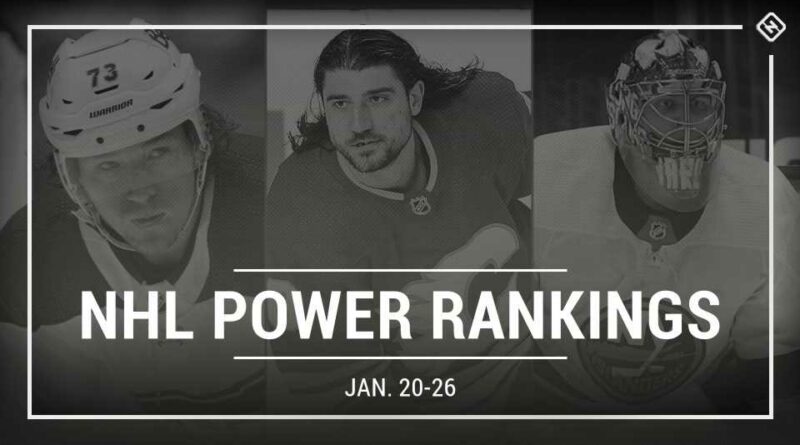 The 2021 NHL season is a 56-game sprint to the Stanley Cup playoffs. As a result, hockey fans won’t get a chance to see the best and brightest stars hit the ice at the All-Star Game. Had the season started in October as normal, this year’s edition would have slated to occur this coming weekend in sunny (and warm) Florida.

Instead, we’re just a handful of games into the season, and while it’s hard to gauge how things will actually look when the season is scheduled to end in May, teams are already seeing players rise to the top.

In honor of the annual event, this week’s power rankings pay homage to the guys who are showcasing All-Star-worthy performance.

Tyler Toffoli: The offseason signee has tallied eight points in five games — and victimized his ex-buddies, the Canucks, for seven of those, including a hat trick on Jan. 20. He also leads the Canadiens in Corsi For percentage (64.12) and Expected Goals For (4.02) at 5v5, per Natural Stat Trick .

Mitch Marner: The 23-year-old forward, playing on a team littered with veterans, has become a true leader. In eight games, he has five goals — two of them game-winners, including his third-period tally Tuesday against the Flames — and 12 points. He already has five multipoint games in this short season and an astronomical 31.3 shooting percentage (5 for 16).

Vitek Vanecek: He was expected to be the backup in net, but instead he has started five of the Caps’ first seven games, posting a 3-0-2 record, .918 save percentage and 2.19 GSAA.

Anton Khudobin: Three games, three wins, a 0.99 goals-against average, a .958 save percentage and a shutout. Brilliant.

Mikko Rantanen: Like a few teams on this list, Colorado has a few players who could have been anointed All-Stars, but with an NHL-best six goals (tied with Vegas’ Max Pacioretty) in seven games, Rantanen is the cake-topper.

Brad Marchand: As scripted, the feisty winger leads the Bruins with four goals and nine points — and two of those goals were 5v5! (Reminder: Boston didn’t score an even-strength goal until Game 4 of its season.)

Travis Konecny:  The forward is doing it all this season as he is tied atop the team leaderboard in points (with Jacob Voracek and Kevin Hayes at eight apiece), goals (with James van Riemsdyk at five) and shot attempts (with Joel Farabee at 20).

Nick Foligno: The Blue Jackets captain is a leader on and off the ice. He has three goals and four points in seven games, and he kept his team together despite the drama — and then the trade of — Pierre-Luc Dubois.

Steven Stamkos: Yes, Victor Hedman, Brayden Point and countless other Lightning players could be on this list, but none have returned to the game like Stamkos has. Tampa Bay’s captain missed all but one bubble hockey game — and it was a glorious one when he scored on his lone shift during the Bolts’ Stanley Cup championship run — following multiple core repair surgeries, and now he leads the team with seven points.

Andrew Copp: The Jets made news during the week with their acquisition of star centerman Pierre-Luc Dubois, but another Winnipeg middle man is having an All-Star worthy start to the year. Copp leads the team in individual Expected Goals (2.93), shot attempts (32), individual Scoring Chances For (22), individual High-Danger Chances For (13) and Rebounds Created (seven) at 5v5, according to Natural Stat Trick . He’s on a career-best five-game point streak and has four goals in seven games — just seven off his career high of 11 two seasons ago.

Jack Hughes:  The sophomore sensation has been on fire since the start of the 2021 season. He has collected seven points (three goals, four assists) in six games and is already one-third of the way to his 2019-20 point total, which he reached in 61 games.

John Gibson: The Ducks aren’t very good but don’t lump Gibson into that group. Anaheim’s netminder is once again putting up eye-popping numbers out West. In six games (the team has played seven), he has a 1.67 goals-against average and a .948 save percentage (second-best in the NHL among goalies who have started at least four games) and, according to Hockey Reference , leads the league with eight Goals Saved Above Average.

Semyon Varlamov: While head coach Barry Trotz is a little angry at his club , the one player he shouldn’t be mad at is his No. 1 netminder. In four games, Varlamov has a ridiculously impressive .966 save percentage (tops among NHL netminders), stopping 115 of 119 shots. Along with the player at No. 16 on this list, he’s one of two NHL goalies with two shutouts.

Kirill Kaprizov: The rookie sensation is tied atop several leaderboards with his six points in seven games — the Wild’s scoring list (with Jordan Greenway and Joel Eriksson Ek) and the rookie scoring chart (with the Devils’ Ty Smith).

Filip Forsberg: There aren’t a whole lot of positives with this Predators group (3.17 GA/GP while only scoring 2.50 GF/GP at the start), but Forsberg does have four of the team’s 15 goals. While no one has an individual Expected Goals above 1.0, Forsberg leads the team at 0.97, and he also is tops among forwards in individual Corsi For (24) and individual Fenwick For (20) at 5v5, according to Natural Stat Trick .

Chris Tanev: The ex-Canucks blue-liner has brought a calming presence to the Flames’ blue line as well as an impressive, team-leading 12 blocked shots through five games. He and partner Noah Hanifin are the only defensemen with a positive plus-minus on the team (Hanifin is plus-4, Tanev is plus-3) and, as noted by Flames Nation’s Ryan Pike, are a dynamic shutdown duo at even strength:

Jack Eichel: The Sabres captain finally tallied his first goal of the season (and it was a game-winner) Tuesday night, but he has been stellar otherwise with seven assists, a 61.62 Corsi For percentage and a team-best 70.53 Expected Goals For percentage at 5v5 (per  Natural Stat Trick ).

Anze Kopitar:  Seven games, 10 points, nine of them helpers. The Kings captain is tied for the league lead with Vegas’ Mark Stone at 1.29 assists per game.

Jaccob Slavin: The Hurricanes haven’t played in Week 2 because of a COVID-19 outbreak that has sidelined a number of players. When they were playing, Slavin was once again anchoring the blue line with an individual Corsi For (13), High-Danger Chances For percentage (66.67) and Expected Goals For percentage (66.65) while logging a team-best 52:34 of ice time at 5v5, per Natural Stat Trick .

Jesse Puljujarvi: Yes, obviously, Connor McDavid and Leon Draisaitl would be at an All-Star Game. And, yes, Puljujarvi only has two assists in eight games. But after not playing in the NHL last season — he shipped off to Europe because he wasn’t happy — he has returned and played well for head coach Dave Tippett. (Note: Tippett was hired last season by the Oilers and was not one of Puljujarvi’s coaches in 2018-19). How well has he been playing? Tippett had him on the ice when Draisaitl scored the game-winner Sunday night with 0.7 seconds remaining in regulation.

Nils Hoglander: The rookie has looked solid — four points in eight games — although we haven’t seen a lacrosse-style goal yet, so we’re all a little disappointed.

Tomas Hertl: Hertl is off to a solid start in his eighth NHL season; he’s leading the Sharks with three goals and four assists in seven games. Four of his points have come with the man advantage, which ties him for 12th in the NHL with a bunch of players.

K’Andre Miller:  It’s hard to pick someone on a team that has not looked good at all, but the rookie is a brightly shining bright spot. He notched his first NHL goal Sunday with a blast from the point and is an impressive plus-6 on a team that is filled with players in the negative for plus-minus. After a shaky first game, he has looked solid while being paired with Jacob Trouba. He has been on the ice for eight of the Rangers’ 11 goals this season.

Pius Suter: The Blackhawks are just not very good, but there was a great moment Sunday when the 24-year-old rookie not only scored his first NHL goal but also added two more for his first NHL hat trick.

Bobby Ryan:  One of the best stories of the early season is the resurgence of Ryan, who has four goals and five points in six games. Detroit is not expected to be anywhere near good this year but it’s fantastic to see the ex-Senator loving hockey and scoring again. It has been a while since he has hit the 30-goal mark (2011-12 with Anaheim) or even the 20-goal mark (2015-16 with Ottawa), but he could hit one of those this season if he keeps up this pace.

Brady Tkachuk: The young Senators may have fallen back to earth, but Tkachuk is once again a bright spot. He has four points (two goals, two assists) in six games and, like his older brother in Calgary, is always in the mix; he leads the team with six penalties drawn. The 2020 All-Star also leads the Senators in shot attempts (24) and hits (21) at 5v5, according to Natural Stat Trick . 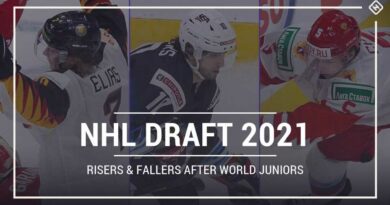 Stanley Cup Playoffs Daily: The Schwartz was with St. Louis in elimination of Jets