Home » NHL » NHL trade buzz breakdown: Who should stay, who should go early this season

The NHL trade deadline is almost four months away and yet there’s considerable trade chatter around the NHL. Here are potential trade targets and whether it makes sense for them to be dealt now:

Deal: The stalemated contract talks with Nylander are only part of the story. After giving John Tavares $11 million per season last summer, the Maple Leafs are looking at giving Auston Matthews a richer deal. Mitch Marner also is looking at a big payday. Even if they can negotiate a bridge deal with Nylander, and that could be wishful thinking, general manager Kyle Dubas has salary cap issues ahead. Plus, the next negotiation with Nylander is not going to be any easier. Dubas undoubtedly is looking at whether he could add a proven defenseman, with some cost certainty, in a deal for Nylander. The defenseman-rich Carolina Hurricanes could be a good fit for a Nylander trade.

No deal:  Although Simmonds is a potential summer unrestricted free agent, it doesn’t make sense to trade him now. The Flyers have endured a bumpy start and can’t afford to move Simmonds, who leads them with seven goals. This should be a playoff team. Let’s see where the Flyers are in February before making a decision on Simmonds.

No deal: Like Bobrovsky, Panarin is expected to leave July 1 as a free agent. But they can’t trade him now. He’s the catalyst of their offense. He has 15 points in 11 games. You ride Panarin as long as you can. The Blue Jackets would still receive a strong return if they trade Panarin in February.

MORE: From pucks to pot: Could NHL be a leader in marijuana policy?

Deal: The Rangers announced late last season they are in rebuilding mode, and Hayes will be a UFA on July 1. They are not going to re-sign him. Why wouldn’t they trade this big center/forward to add a prospect? It also opens up playing time for younger players.

No deal: As a pending free agent, Myers will be on potential trade lists. But the Jets can’t move him. They are a contender, and he’s their No. 4 defenseman, playing 18:12 per game. This is a team looking to make a postseason run, not fretting about whether they can get a return on Myers before he leaves.

Deal: The only issue is that Zuccarello is a popular Rangers player, but he would have considerable trade value. He is producing this season, 10 points in 13 games. Some team may overpay to add his offensive touch.

No deal: Yes, he’s going to be a UFA. But the emphasis should be on proving to Duchene that he should re-sign with the Senators. At 5-5-2, the Senators are better than expected. 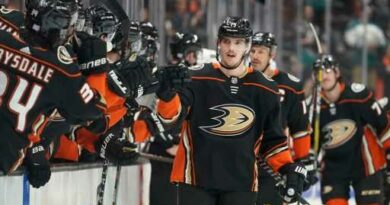