Minnesota Wild winger Jason Zucker isn’t particularly happy about the uncertainty of his future with the team.

Zucker, who signed a five-year extension with Minnesota last July, was almost on his way to Calgary at the trade deadline before that deal fell through and was part of trade discussions with Pittsburgh for Phil Kessel last month.

“As far as I know, they don’t want me to leave and I don’t want to,” Zucker told The Athletic’s Michael Russo “That’s kind of part of the business. But I will say, I do want to be somewhere I’m wanted.”

Zucker’s extension was one of Paul Fenton’s first moves as general manager of the Wild. Fenton has put plenty of effort into building the team in his image, trading Nino Niederreiter, Charlie Coyle and Mikael Granlund at the deadline along with his attempts to move Zucker.

“I’m going to stay out of it because realistically, I mean Paul’s never treated me poorly,” said Zucker, who was the Wild’s second round in 2010. “I have respected Paul in his position and what he does. Can I say fully that I agree with everything? No, but I can say that about any position, any person in the world I wouldn’t totally agree with everything. And most people would say that about me, and that’s just the way it works.”

“So, I mean, I have respect for him and what he’s trying to do for his job. At this point, it’s his deal to make or not make. He’s going to do what he wants to.” 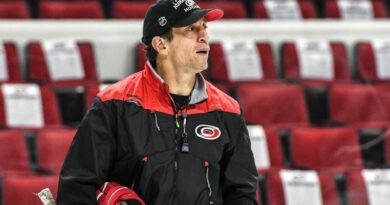 Former NHL tough guy Georges Laraque has COVID-19, pneumonia in both his lungs

Winners and losers of the 2020 NHL draft