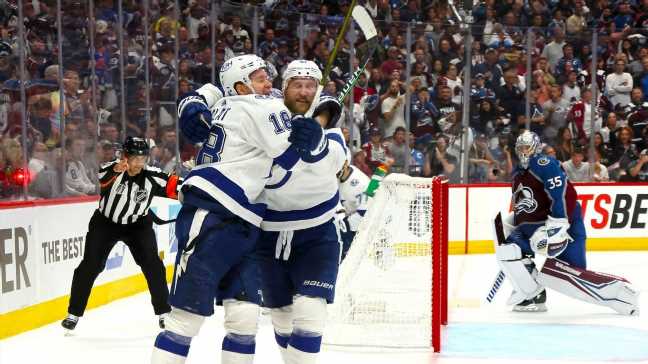 DENVER — If the Tampa Bay Lightning need a clutch goal in the third period during the Stanley Cup Playoffs, Ondrej Palat is the one scoring it.

Palat tallied the game-winning goal at 13:38 of the third period on Friday night, allowing the Lightning to avoid elimination with a 3-2 victory over the Colorado Avalanche in Game 5 of the Stanley Cup Finals and sending the series back to Tampa.

“He keeps doing it,” said winger Pat Maroon. “He’s a gamer. He plays the right way every night. He gets to those dirty areas and he gets rewarded. He’s a star in this league. He’s an elite player in this league. He shows up in big-time moments.”

The goal was his 11th of the playoffs. Palat has scored seven of those 11 goals in the third period of games. That included two game-winning goals against the New York Rangers, an empty-net goal that clinched the sweep against the Florida Panthers and his heroics to keep the Lightning’s Stanley Cup three-peat chances alive in Denver.

With the score tied 2-2, the Lightning cycled the puck around the Avalanche zone. Palat waited with his stick held high in the slot for a pass. Defenseman Victor Hedman slid him the puck and Palat’s shot hit Colorado goalie Darcy Kuemper and trickled past him for the 3-2 lead.

“I was just trying to get open and get lost a little bit. I saw Heddy and he sees me. So it was just an easy shot for me. I’m just trying to one-time [it] and lucky enough it went in,” said Palat.

The goal set off a celebration back in Czechia, where Palat’s family had organized a watch party for Game 5.

“My parents just texted me that there was like 80 people there. It was 2 o’clock in the morning. So it’s nice to feel all the support from back home even when the game is pretty late,” said Palat.

Palat is a beloved player among his teammates. The winger joined the team in 2012-13, having played for coach Jon Cooper with the Syracuse Crunch in the AHL.

“All I can say about Palat is he plays with some of the best players in the world every year, and he’s always the third guy talked about on this line. But if you ask the other two players on his line, they would talk about him maybe the most,” said Cooper. “He just does his job. And he gets rewarded for it because of his effort. And everybody in that room knows how much Palat has brought to this organization, and I feel like every year in the playoffs I have the same conversation about Ondrej Palat.”

Palat’s goal completed a surprising road victory for the Lightning, who avoided elimination after a crushing overtime loss at home in Game 4. The Avalanche had a raucous crowd ready to see the Stanley Cup presented on home ice. Those fans left having seen Tampa Bay start the game strongly and force Colorado to play catchup.

“We didn’t have a choice. This is do or die for us. This group did a great job of focusing on the present and that was come in here, a very tough place to win, just play a solid game and give ourselves a chance. That’s what we did tonight. We won one game,” said captain Steven Stamkos.

“It’s just one game,” he said. “We cannot hang our hat on anything that happened tonight other than for the fact that everybody has to go home, everybody has to get back on a plane. But I think if you look at this series, was it meant to go six or seven? Damn rights it was? It’s two damn good hockey teams here. We’re looking forward to seeing you guys in two nights.” 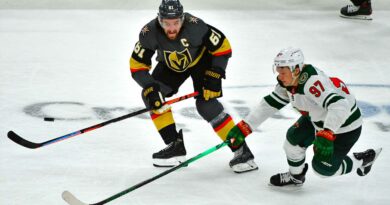