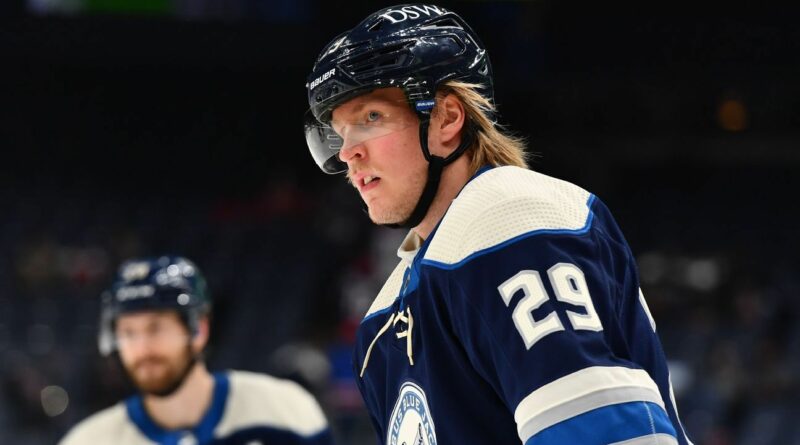 Patrik Laine is a winger for the Columbus Blue Jackets. Depending on what he’s wearing to the game, he is also a James Bond villain, an extra from “The Matrix” or the DJ at a club that’s strictly for vampires.

These were some of the reactions to Laine’s pregame fits, from the purple blazer with the black turtleneck he wore to the Blue Jackets’ opening night game to the blue tuxedo jacket and black checkered tie he crushed this week. He finished these audacious ensembles with slick hair and rainbow-tinted trapezoidal sunglasses.

“I don’t know what to tell you. It’s just an outfit that stands out a little bit,” he told ESPN recently. “You gotta bring your A-game off the ice too. Look good, play good.”

Laine, 23, is aware that his clothing choices have become fan obsessions, thanks to the Blue Jackets’ spirited social media feeds. “It’s always fun to see the fans react to that kind of stuff. But even if I didn’t get it, I would still feel confident and happy in my selections,” he said.

Laine wasn’t confident or happy last season. The Winnipeg Jets traded him to the Columbus Blue Jackets in a deal that saw them acquire center Pierre-Luc Dubois. His offensive output dropped to 1.8 points per 60 minutes, the lowest rate of his career. His goals per 60 minutes dropped under 1.0 for the first time. Blue Jackets fans were disappointed, and he was disappointed in himself, as he struggled through the NHL’s pandemic-impacted season.

“Last year was tough. Kinda lost the reason why we play hockey: the passion, having fun,” said Laine. “I feel like that’s been back for this year. I think this year, I’ve been able to just enjoy hockey.”

Yet that enjoyment has been tempered. Laine suffered an oblique injury that limited him to 15 games this season. During that injury rehab, he suffered a personal tragedy: His father, Harri Laine, died suddenly at 54 years old.

“It’s been the hardest time of my life, for sure. It’s still in my mind, quite a bit,” he said of his father’s loss.

It should all weigh on Laine: The adversity, the grief, along with those unfulfilled expectations of others that have dogged him during his career. But he keeps it all in perspective.

“It’s just hockey,” said Laine. “You gotta remember that every now and again.”