TAMPA, Fla. — In mid-February, Stan Kroenke was on the podium to receive the Lombardi Trophy from NFL commissioner Roger Goodell after the Los Angeles Rams beat the Cincinnati Bengals in the Super Bowl.

The NHL’s custom is much cooler and appropriate. It’s about the players, so captain Gabe Landeskog received the Stanley Cup from deputy commissioner Bill Daly after Sunday’s 2-1 win over the Tampa Bay Lightning.

As the Avalanche players paraded the Cup around the ice, it allowed Kroenke, who owns the Rams, Avs, Nuggets, Rapids and Mammoth, to beam alongside his son, Josh.

How does the Cup compare to the Super Bowl?

“I don’t know if you can compare them,” Stan Kroenke said. “But the comparable is you had the ultimate year and you’re so happy for the players involved and the people in the organization. That is the commonality. It’s just sort of the ultimate reward for a lot of hard work by a lot of people.”

Kroenke got his Cup moment along with the rest of the organization on the Amalie Arena ice.

Josh Kroenke is the Avalanche’s president/governor and agreed with his father about not comparing the Rams and Avalanche titles.

“To go against the two-time defending champion (Lightning) and have a tough Game 5 back in Denver and come here and come out as a champion speaks volumes for the group,” Josh told The Denver Post.

Stan Kroenke bought the Avalanche and Nuggets in 2000; a year later, the Avs beat New Jersey in Game 7 of the Cup Final, which was their last appearance until this season.

The Avalanche built to this point after finishing last in the NHL five years ago, but had to deal with the adversity of three consecutive second-round exits. It broke through this postseason and didn’t stop.

“It’s probably the most resilient group of guys I’ve come across of all our teams,” Josh Kroenke said. “To win a championship in the fashion they did … I’m just so proud.”

The Rams won the Super Bowl in their home stadium and against an upstart Bengals team, but the Avalanche went 9-1 on the road in the playoffs, clinched each series on the road and faced a battle-tested Tampa Bay club.

“(The Lightning is) such a great team, they play and they wait for your vulnerabilities,” Stan Kroenke said. “I thought that showed our poise. The other team was so poised and I thought we matched them and (goalie) Darcy (Kuemper) made a couple of big saves and we outlasted them.”

Landeskog was the first player Josh Kroenke found on the ice for an embrace.

The atmosphere for Avalanche home games was at a different energy level than the three games in Tampa and Stan Kroenke saluted Avs fans.

“The fans in Denver are awesome,” he said. “The commissioner (Gary Bettman) even said our building is the example people should look at and the fans make it. You walk in there and it’s magical.” 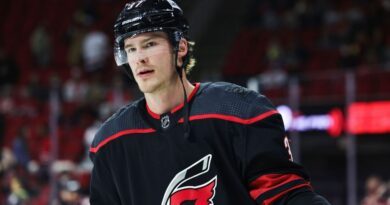 Wyshynski: The impact of hockey’s Russian backlash, and what’s next