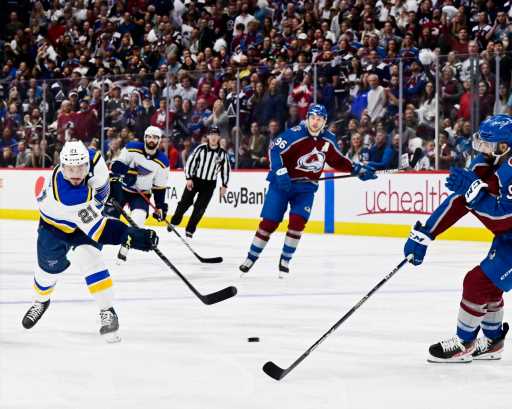 Back in the day for DU, just a few miles down the freeway from Ball Arena, Tyler Bozak scored 26 goals in 50 games. But all of those were overshadowed by his overtime marker to propel the St. Louis Blues past the Avalanche, 5-4, in Game 5 of the teams’ Western Conference semifinal series on Wednesday night.

Bozak, in his first and only shift during overtime, slung a shot from above the circle that found its way past Avalanche goalie Darcy Kuemper.

“I had some goals in college, definitely nothing of this magnitude,” Bozak said. “The playoffs obviously amps everything up to a different level. It’s definitely awesome to contribute, especially in that situation.”

The Blues overcame a 3-0 deficit. Facing elimination, St. Louis battled back to tie the score at 3- and 4-all ahead of Bozak’s goal to send the series back to St. Louis for Friday’s Game 6. The Avalanche leads 3-2.

“Just a resilient group of guys,” Bozak said. “(We) got down and didn’t want the season to be over, fought hard, got some big goals late and I was lucky enough to be on the end of one in overtime.”

Shortly after their third unsuccessful power play, the Blues finally scored via Vladimir Tarasenko’s goal at 14:42 of the second period. The switch was flipped. St. Louis started to win puck battles. It started to create sustained offensive zone time. It started to put the Avalanche on its collective heels.

Robert Thomas’ first goal of the playoffs cut the lead to 3-2 with 10:03 remaining, followed by Justin Faulk’s first with 4:46 left in regulation.

Following Nathan MacKinnon’s third goal for the Avalanche, a highlight-worthy effort with 1:56 remaining, Blues coach Craig Berube called time for an extended stoppage to plan a counterattack while hundreds of hats were cleared off the ice.

“It could obviously be really deflating, but our team has a lot of guts and I thought they were positive,” Berube said. “We talked about what we were going to do. It ended up working out.”

“You have nothing to lose so you might as well throw it all out there,” Thomas said of trailing 3-0. “That was our mentality and it seemed to work tonight.”

A fourth-line player, Bozak was fresh for overtime — he didn’t play over the final 9:16 of regulation.

“In the third, it’s about tying it up so I’m rolling three lines most of the time,” Berube said. “It’s not that you don’t want to play those (fourth-line) guys, but you’re trying to catch up and tie it up. You get into overtime, I think you have to start over again and get your guys out there and rotate them and get playing because if you don’t, you’re going to burn your top nine (forwards) out.”

“There is definitely no such thing as a bad shot,” said Bozak, who has 13 goals in 67 playoff games. “I tried to get it through traffic and it went in.” 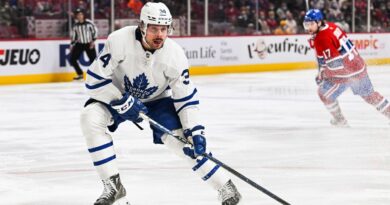