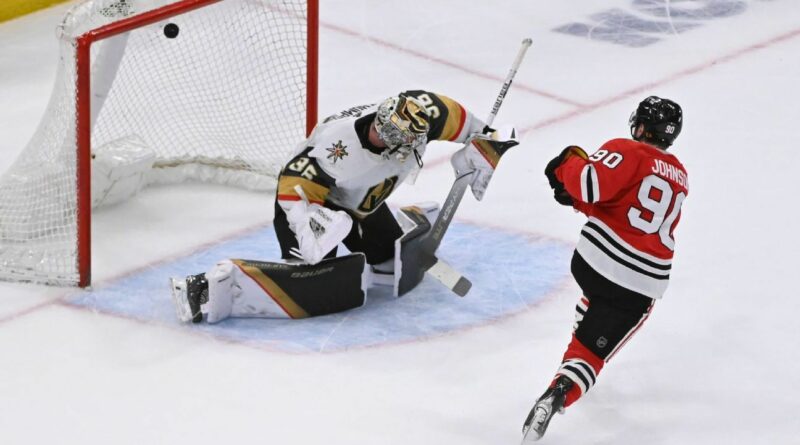 It’s official: Vegas will miss the NHL postseason for the first time in franchise history.

The Golden Knights’ second-half collapse to this season left them with wafer-thin playoff hopes, and those were snuffed out entirely on Wednesday in a 4-3 shootout loss to host Chicago.

That put Dallas’ magic number to clinch a spot ahead of Vegas at one point, which it dropped in the bag Wednesday in the loss to Arizona.

Now that the Stars have clinched the Western Conference’s final playoff spot, the 16-team field is set. Seeding will continue to be determined this week.

“I’m surprised. I’m disappointed. I’m at the front of the line for responsibility,” Vegas coach Peter DeBoer said. “There’s a lot of expectations on this team. It’s not an easy thing and it doesn’t feel good for anybody right now.”

For the Golden Knights, this goes down as a wasted season. The expansion club had made the playoffs in each of the past four seasons, advancing to the Stanley Cup Final in its inaugural 2017-18 campaign.

Vegas looked this season like they could be contenders again. In early February, the Golden Knights were top 10 in the league with a 28-16-3 record and hadn’t suffered consecutive regulation losses in over two months.

Around that same time, captain Mark Stone was sidelined by an injury from which he would not return until early April. That was a significant loss but moving Stone to long-term injured reserve allowed Vegas to activate Jack Eichel after his recovery from herniated disc surgery.

The Golden Knights had orchestrated a blockbuster trade with Buffalo last November to bring Eichel on board and put them over the top. And for Eichel, joining Vegas meant a chance to final appear in his first career playoffs after failing to reach the postseason from 2015-21 with the Sabres.

Eichel has produced for this new team, collecting 12 goals and 22 points in 33 games. It was all the Golden Knights’ other issues that caught up to them.

Key injuries to Stone, Max Pacioretty, Robin Lehner, Reilly Smith and others took their toll. Stone was able to re-join the lineup on April 12 but was point-less in his first six games back. And then Lehner, after battling difficult shoulder and leg injuries, was forced into season-ending surgery earlier this week.

“On paper, what can anyone say we’re missing? We have it all,” Pacioretty said. “But at the same time, everyone knows that hard work beats that talent on paper and chemistry is probably what’s most important, on and off the ice.”

Vegas’ playoff future then rested on rookie Logan Thompson in the crease, who entered Tuesday’s game with a solid 14-9-5 record and .917 save percentage (best among freshman goalies with at least 10 starts).

Vegas couldn’t overcome its own defensive deficiencies though and left Thompson out to dry repeatedly of late. Against the lowly San Jose Sharks on Sunday, the Golden Knights led twice at 3-1 and 4-2 only to fall apart down the stretch and lose in a shootout.

Ultimately, Vegas lacked for consistency, among other things, when it was needed most and those struggles caught up to them in the end.

“There’s obviously going to be a lot of time for reflection,” Pacioretty said. “A lot of decisions will be at this point kind of out of the players’ control but you got to expect when a team underperforms the way we have this year, all bets are off.”