Home » NHL » Winnipeg Jets GM Kevin Cheveldayoff: Dustin Byfuglien ‘has to decide in his mind that he wants to play’

As the clock turns to 2020, Winnipeg Jets fans must wonder whether suspended defenseman Dustin Byfuglien will even take the ice for the team this season. Will the team even welcome him back after he returns from an October ankle surgery and if he wants to play?

General manager Kevin Cheveldayoff on Monday tried to answer those questions when he spoke to reporters as part of a state of the union address of sorts midway through the Jets’ season.

“That is really going to be up to Buff and his leg or ankle and that aspect of things,” Cheveldayoff said about how long Byfuglien’s recovery could take via the Athletic. “There’s still a few more phases to go before anything potentially could become real. He’s working at an outside clinic. Do we know how the progress [is going]? Sure. We get updates on how the progress is going. Are we directing it? No. The doctor who he had the surgery [with] is directing it.”

Byfuglien’s absence from the Winnipeg Jets has loomed over the team like a specter this season. The burly defenseman took a personal leave of absence in September that later turned into speculation he was considering retiring.

The Jets suspended Byfuglien during training camp so as to get off the hook for his $7.6 million salary until he does report, but the matter was only further complicated when the 34-year-old underwent ankle surgery in October and the NHLPA filed a grievance on his behalf challenging his suspension.

On New Year’s Eve, the general manager noted that Byfuglien’s injuries limited him to only 16 NHL games in the last calendar year (10 in the regular season, six during the first round of the 2019 NHL playoffs). He added that the defenseman has progressed to the rehab phase as part of his recovery from that October surgery; however, he doesn’t know how long that phase will last.

“The first and foremost thing is Dustin Byfuglien has to decide in his mind that he wants to play,” he added. “That’s the biggest hypothetical, so we can all answer those hypotheticals if that one gets answered first. He’s been off for quite a while now.”

When it comes to the players association’s grievance filed on Byfuglien’s behalf, Cheveldayoff said he has not yet received an update on the potential timeline for that process. He also did not know whether or not Byfuglien is close to skating again, and even said he has not spoken to the veteran defenseman in some time.

Ultimately, the cards appear to be in Byfuglien’s hands — and his team, sitting just inside the Western Conference’s playoff picture on New Year’s Eve, does not seem to know how or when he might play them. 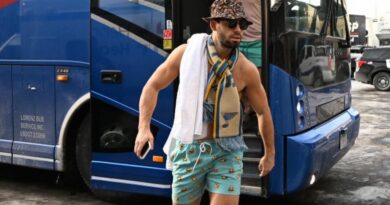 It’s frigid at the Winter Classic, but the Blues are keeping pregame fashion tropical