Home » NHL » With an Avalanche win, and $34K on the line, this bettor is on the verge of prognostication glory 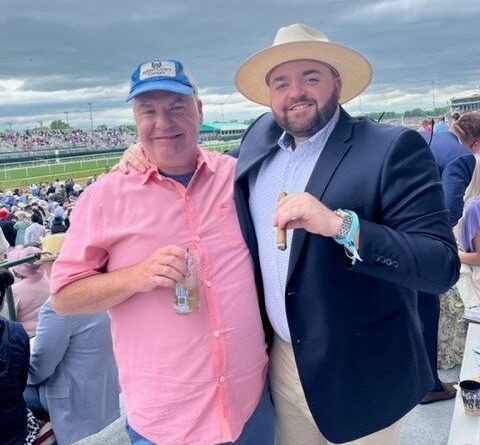 It was Super Bowl Sunday in Las Vegas, and drinks were flowing at a private party for VIPs inside a Japanese restaurant at the Bellagio.

High-rollers were betting shots of Fireball on whether the next play in Super Bowl LV between the Kansas City Chiefs and Tampa Bay Buccaneers would be a run or pass. Things were getting sloppy. In the middle of it all, Tanner Flynn, a tech salesman from Nashville, was sweating the last leg of an $8 parlay, placed seven months earlier. The bet would pay over $20,000, his biggest score ever.

The first four legs of the parlay had already hit:

The Buccaneers, who were 15-1 to win the Super Bowl when Flynn placed the bet with FanDuel on July 7, 2020, jumped out to a 21-6 lead. Flynn was one half away from correctly predicting the champions of all four major U.S. professional sports. At halftime, he posted a picture of his parlay on Twitter, adding “1 more ducking half.” The tweet went viral.

“That night’s a blur,” Flynn told ESPN. “I was extremely intoxicated and couldn’t figure out how to turn off my Twitter notifications, so the whole night, it was bzzz, bzzz, bzzz, nonstop.”

The Buccaneers would go on to blow out the Chiefs 31-9, completing Flynn’s wild parlay, which paid out at approximately 2,600-1 odds.

Fast-forward 16 months to this week, and, remarkably, Flynn is in position to do it again. If the Colorado Avalanche finish off the Lightning to win the Stanley Cup, Flynn, for a second straight year, will have correctly picked the champions of the NFL, NBA and NHL in a parlay bet with giant odds.

The Avs lead the best-of-seven Stanley Cup Final against the Lightning 3-1, with Game 5 Friday in Denver.

On Nov. 9, nearly a year removed from his first big parlay score, Flynn was sitting on a couch in a buddy’s Nashville apartment, watching his alma mater, Purdue, play Bellarmine in the Boilermakers’ season opener of the basketball season. That’s when he began to build another low-stakes, long-shot parlay featuring the champions for the NFL, NBA, NHL and college football.

His friend was telling him not to take the Golden State Warriors in the NBA, but he did anyway. He backed the Los Angeles Rams to win the Super Bowl, the Georgia Bulldogs to win the College Football Playoff National Championship and the Avalanche to win the Stanley Cup. Like he had on his previous parlay, he added a random UFC fight — Israel Adesanya to beat Robert Whitaker in UFC 271 in February — to his card and placed the $25 five-leg bet with FanDuel at +136,367 odds. It took him no longer than 20 minutes to create the parlay that would pay $34,116.88, if the Avalanche do their part Friday. The Bulldogs, Adesanya, Rams and Warriors have already done theirs.

“At the end of the day, I like to bet on talent,” Flynn said regarding the reasoning behind his picks. “Talent and a little bit of storyline, some vengeance or a little extra motivation.”

Flynn says the parlay he placed in November from his friend’s couch is the only such parlay he has placed with the 2022 champions. He included the one UFC fight to increase the payout odds because he had done it on his previous parlay.

“Those are the two main questions I get: ‘How many bets did you place, and why did you put a UFC fight in there?'” he said.

Flynn, 26, is no stranger to betting. He typically bets $100 to $250 on straight wagers and much less on his long-shot parlays. He learned a lot of his gambling chops from his father, Deron Flynn, who is big into handicapping horse racing and betting on sports. The two regularly attend the Kentucky Derby together and have made watching the Super Bowl in Las Vegas a tradition over the past few years.

“I probably knew what a spread was by the time I was like 10,” Tanner Flynn said, adding that the only advice he has received from his dad about his current parlay has been “cash out.”

He has placed $2,500 worth of bets at varying odds on the Lightning to beat the Avalanche in an attempt to hedge his parlay, though.

“Hopefully, we’re good on hedging,” said Flynn, who is planning on paying off his Tesla with his potential winnings. “If we go to a Game 7, then I will probably reevaluate it.”

Flynn emphasizes that he knows how lucky he is to be in a position to potentially hit a second straight long-shot parlay. He also knows it’s not over yet, either.

“It’s surreal,” Flynn said. “I’m not going crazy yet at this point, but my friends and family that know about this bet are constantly texting me. One of my buddies texted me, ‘Dude, you’re going to make more than me each year off of two bets.'”

NHL trade deadline 2020: Breaking down the biggest rumors, deals of the day