McLaren's return to the Indianapolis 500 has neared total collapse after Fernando Alonso failed to lock himself into the field on the first day of qualifying.

The two-day qualifying process guaranteed a spot in the May 26 race for the fastest 30 cars in Saturday's qualifying. 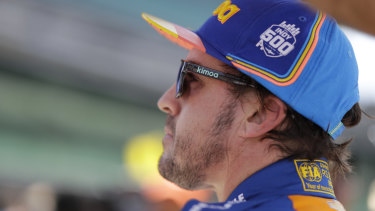 Fernando Alonso and McLaren have struggled.Credit:AP

It took Alonso four attempts just to crack the benchmark, but he was knocked out by Graham Rahal, the final driver to make his run as the pistol was fired to signal the end of the session.

The two-time Formula One world champion watched Rahal knock him into Sunday's last-gasp group, hopped from his car and briskly walked down pit lane. He stopped briefly to sign a handful of autographs but seemed frustrated with McLaren's week-long struggle at Indy.

"We didn't have the speed," the Spaniard said. "If we don't make it, it is because we don't deserve it."

McLaren returned to the Indy 500 this year for the first time since the 1970s as an expected rehearsal for a full-time IndyCar entrant. Alonso needs only to win the Indy 500 to complete motorsports' version of the Triple Crown, but no one expected McLaren to struggle so much.

The car had an electrical problem during last month's testing and was plagued with similar issues on opening day. The alternator and wiring loom needed to be replaced, then Alonso crashed and hit the wall three times Wednesday.

McLaren missed nearly two days on track trying to ready a back-up car, which finally got out Friday and was too slow to make inroads.

Six drivers will get one qualifying attempt for the final three spots in the field.

"At the moment, all we can try to do is the four laps, clean, no mistakes, flat on the floor," Alonso said. "Then, if it's enough to be in the top three of six, we'll take it and we'll try to go race. If it is not enough, if we are the fourth, fifth or sixth, it is what we deserve. There were three cars quicker than us and there's nothing we [will be able to] do more than that."