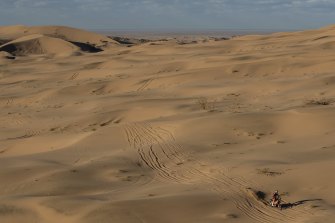 Toby Price in action at this year’s Dakar Rally.Credit:AP

The 32-year-old was fastest through the last four checkpoints having taken the lead at the first early in the 564-kilometre stage.

"It's been a good day. We pushed hard at the start, made some good ways and then I caught up with the Honda boys. Ricky and them were in front, but it's been a good stage," said Price.

"It's actually the first time I've ridden with a whole big group, so it was quite enjoyable but at the end of the day they are competitive so we need to stay in front of them. We're happy with the day and we'll see how day six goes now." 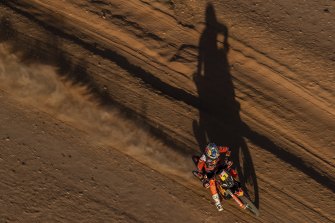 The Dubai-based 30-year-old injured his back and left shoulder in the fall after 187km of the stage from Al Ula to Ha'il, organisers said.

"Winner of the 2017 Dakar Sam Sunderland has had to quit the race on day 5 of #Dakar2020 after a crash. He didn't lose consciousness and was quickly attended to by the medical staff of the race," they posted on social media.

Sunderland had led the rally, being held in the Middle East for the first time after a decade in South America, after the second stage and was fastest on Wednesday before incurring a five-minute penalty for speeding in a neutralised section.

Argentina's Kevin Benavides has dropped back third, to 11 minutes behind Price.

The sun shone hot, but Ricciardo provided the yellow glow at the Park

Wright mocks Azpilicueta after Bellerin's equaliser for Arsenal
We and our partners use cookies on this site to improve our service, perform analytics, personalize advertising, measure advertising performance, and remember website preferences.Ok