Formula One boss Chase Carey is hopeful the 2020 season can still feature up to 18 races despite being forced to call off another grand prix.

On Monday the Azerbaijan Grand Prix, due to take place on June 7, became the eighth event to be pulled from the schedule due to the coronavirus pandemic. 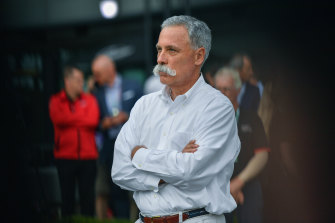 The season is yet to begin after the Australian and Bahrain grands prix did not go ahead this month. Races in Vietnam, China, Holland, Spain and Monaco have also been postponed or cancelled.

However, in a statement on the F1 website, chief executive Carey wrote: "While at present no one can be certain of exactly when the situation will improve, it will improve and when it does, we will be ready to go racing again.

"We are all committed to bringing our fans a 2020 championship season.

"We recognise there is significant potential for additional postponements in currently scheduled events, nonetheless we and our partners fully expect the season to start at some point this [northern hemisphere] summer, with a revised calendar of between 15-18 races."

With the exception of Australia and Monaco, organisers are hoping to find new dates for all races when possible.

In an attempt to create room, the planned summer break was brought forward to the spring, but Carey admits racing could go on into December.

He added: "As previously announced we will utilise the summer break being brought forward to March/April to race during the normal summer break period, and anticipate the season end date will extend beyond our original end date of 27-29th November, with the actual sequence and schedule dates for races differing significantly from our original 2020 calendar."

The earliest the F1 campaign can now start is with the Canadian Grand Prix at Montreal's Circuit Gilles Villeneuve on June 14, but that is also uncertain.