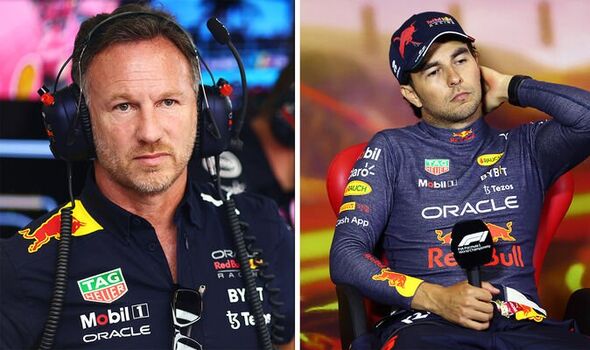 Christian Horner has spoken to Sergio Perez about the Mexican’s angry response on team radio after losing out on the chance to fight for the Spanish Grand Prix. Perez let team-mate Max Verstappen through after he was asked to not hold him up at the end of the race.

The Dutchman was on fresh tyres after Red Bull put him on a three-stop strategy to counter his failing DRS. After the race, Perez said he needed to ‘speak’ with the team to clarify why he was asked to move aside.

When pushed on the issue post-race, Perez said: “We were on different tyre strategies at the time. I let Max by in the beginning then I thought at the time I could go by and not lose crucial seconds to make my strategy work. But anyway, it’s a good team result.”

Horner confirmed he had spoken to Perez after the race to clear the air and explain why Perez was asked not to race Verstappen.

He explained it wasn’t a ‘like-for-like fight’ between the pair as they were both on different strategies at that stage of the race. He said: “I spoke with him when he got out of the car.

“The problem for any driver is that they don’t have a clear overview of the strategy or a race plot in front of them. It’s always going to be emotive to give up a lead, but he played very much the team game.

Perez had a clean race as he worked his way back from a poor qualifying on Saturday. Meanwhile, Verstappen went off at turn four and was held up battling George Russell in the opening stages of the race.

The victory moved Verstappen into the championship lead after Charles Leclerc retired with mechanical issues. However, Horner has denied the team’s decision to switch the cars was not based on securing points for the championship.

Immediately after the race, Horner confirmed he would talk to Perez but added the decision was based on the tyre life of both cars.

He said: “I think we will discuss it and he [Perez] will see the race plot, and he will see that he had close to 30 laps to do on the tyres, which in the end we needed to pit to make sure we covered Russell. In the heat of the moment, you can understand it. If he wasn’t pushing those types of things, he isn’t doing his job.”