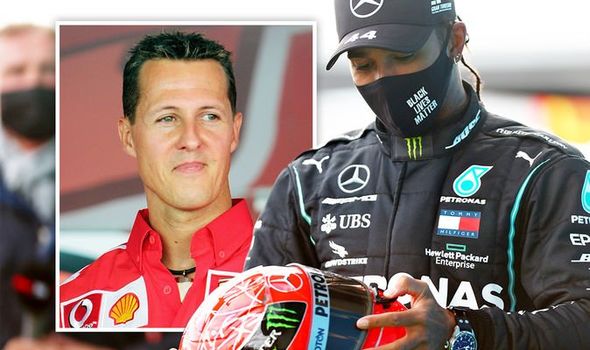 Lewis Hamilton declared it an “incredible honour” to equal Michael Schumacher’s record of 91 race wins in Formula One after winning the Eifel Grand Prix on Sunday to move a huge step towards tying the Ferrari icon for the number of driver’s titles too.

The Brit’s seventh win of 2020 saw him move on to the same number of victories that Schumacher managed across an illustrious career.

Schumacher remains regarded by many as the best F1 driver of all time after winning an unparalleled seven championships.

But Hamilton’s triumph at Germany’s Nurburgring puts him 69 points ahead of Mercedes team-mate Valtteri Bottas, who was forced to retire due to power problems, as he looks to clinch a fourth straight world title.

Post-race, Schumacher’s son, Mick, presented Hamilton with one of his father’s crash helmets to commemorate his achievement, which left the Brit notably moved. 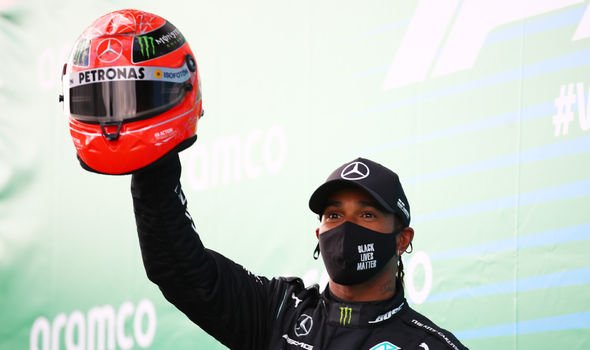 “Wow, I’m really, really honoured man. Thank you so much, I really appreciate that thank you,” he said to F2 leader Mick Schumacher, who had been set to drive for Alfa Romeo in Friday’s free practice before fog cancelled the sessions.

Hamilton then told the cameras: “I don’t even know what to say!

“I mean, when you grow up watching someone, you genuinely idolise them in terms of the quality of the driver they are and what they’re able to continuously do, year on year and race on race, week on week with their team.

“I remember playing as Michael on the game, Grand Prix 2 I think it was.

“Seeing his dominance for so long, I don’t think anyone – and especially me – could imagine that I’d be anywhere near Michael in terms of records. It’s an incredible honour.

“It’s going to take some time to get used to. As I came in the pit lane, that’s only when I realised I’d equalled it.

“I hadn’t even computed it once I’d crossed the line. I couldn’t have done it without this incredible team, everyone continuing to push behind me and giving me their everything. A big, big thank you and huge respect for Michael.”

Hamilton added of his win: “I had a good start to get alongside Valtteri. I tried to give him as much room as possible.

“He was in my blind spot so I moved out wide and he did an amazing job. I remember coming out of the corner thinking ‘good on you man’.

“It was not an easy race. Max drove extremely well. You could see his pace at the end. We have got a serious fight on our hands.”