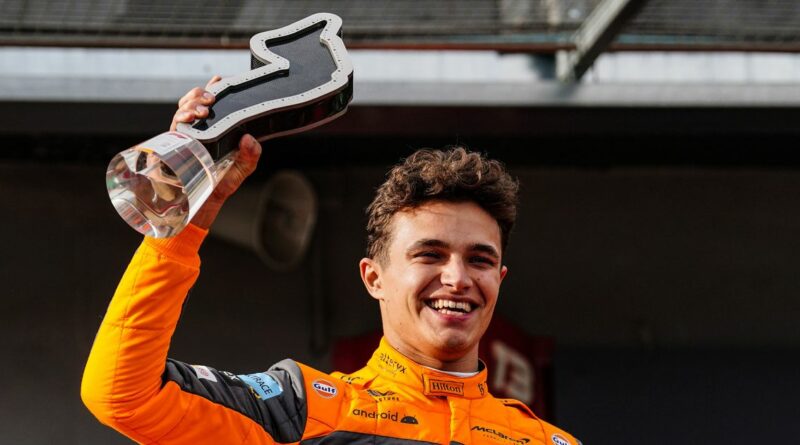 Fresh from a podium finish at Imola, Lando Norris will be looking for similar success in the maiden Miami Grand Prix – but he's already won the hearts of a number of fans on social media.

The British driver continues to catch the eye with his down-to-earth approach and modern similarities with fans, which has seen him become popular on Twitch and launch his own eSports team.

On the track, the McLaren driver is still waiting for his first victory in Formula One but has secured a knockout blow on social media with a slam-dunk design for his helmet which he will wear for the race around the Hard Rock Stadium in Florida.

Norris has unveiled a basketball-themed design for the race in Miami, with the colours perfectly matching the orange of the McLaren he'll be driving as he seeks to add more points to his tally and boost his side's standing in the Constructors' Championship.

Posting his new helmet on Instagram with the caption 'I'm ballin', he revealed the inspiration for the look, saying: “I saw some people playing basketball one time, and I thought, damn, that’d make for a cool helmet. So I did it. It has some cool details on it, like my signature, my logo and my name in black with a nice neon outline.”

Fans lapped up the new design, with Blocvintage declaring: 'That is outrageous' and Carlabelle.ch added: 'This is it. Nothing gets better than this'.

Others used the opportunity to reference the 'porpoising' issues that have hit F1 cars this season, with SimonHorsbol writing: 'Porpoising and this helmet is a golden combo', while Viced1wnl said: 'This helmet + Porpoising = One bouncy boi'.

HAVE YOUR SAY! Is Lando Norris' new helmet for the Miami Grand Prix the best on the grid? Comment below.

It wasn't just your average Formula One fans who were stunned by the design though, with celebrities also getting into the mix as Atletico Madrid and France striker Antoine Griezmann said he 'needs it', while cycling star Mark Cavendish dubbed it 'amazing'.

Norris has continued to star for McLaren this season, regularly outperforming teammate Daniel Ricciardo and showing he has the capability to compete for regular points finishes over the course of the season as the team pushes for success.