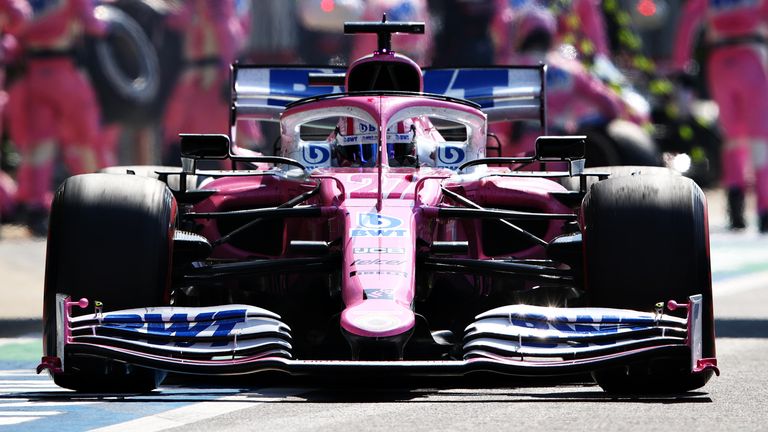 Racing Point co-owner Lawrence Stroll has explained more on why he is “infuriated” with the accusations levelled against his team in F1’s ‘copying’ row.

The fallout from the stewards’ verdict on Racing Point’s brake ducts after protests lodged by Renault dominated the Silverstone weekend off the track at F1’s 70th Anniversary GP.

The controversy is also being seen as a litmus test in a wider debate over the future of parts sharing in F1 and whether teams should be allowed to essentially ‘clone’ other cars, with the Racing Point RP20 having been based on last year’s title-winning Mercedes W10.

Racing Point were docked 15 points and fined £361,000 after it was ruled they had broken F1’s sporting regulations by running rear brake ducts on their 2020 car that were the principle design of Mercedes.

But with four rivals – Renault, McLaren, Ferrari and Williams – unhappy and seeking further clarification on aspects of the ruling, and Racing Point adamant they did nothing wrong, the row could be headed for the FIA’s International Court of Appeal (ICA) with all five outfits lodging intentions to appeal ahead of a Wednesday deadline to firm-up their plans.

Ahead of Sunday’s race, Stroll issued a strongly-worded statement on the matter and later, in a rare sit-down interview, the Canadian told Sky Sports F1’s Rachel Brookes and Johnny Herbert: “I felt this horrible occasion deserved clarification”.

“We are infuriated by the accusations that we cheated,” Stroll said: “There were rules that were some clearly defined, some less clearly defined, and we have no doubt we played within those rules.”

Put to him that rivals felt they had stepped over the line, Stroll replied: “The other teams are certainly entitled to their opinions. I think the other teams are equally as upset that we are performing very well and have a very, very strong car.

“I think if we were running seventh, eighth, ninth or 10th these same teams would not be protesting at all. So I don’t find it a coincidence that we are outperforming them and hence their complaints. I think if they focused on trying to do a better job themselves and less about complaining on me it would be efforts well placed.”

He added: “The FIA last week came up with this ‘grandfather’ clause which we cannot find it existing anywhere ever before. It seems to be a new rule they made up last week. We believe that rule to be non-existent.”

Stroll said he believed F1’s governing body was “dealing with this situation remarkably well” but made clear: “We feel the sanctions are extreme. Both financially as well as the points, and [we want] to set the record straight. We did nothing wrong.”

Mercedes, who are Racing Point’s engine and gearbox suppliers, legally supplied computer-aided design models of their brake ducts for last year’s W10 in late 2018 and early 2019.

The complex row between F1’s teams centres on the fact Racing Point only based the design of their rear brake ducts on the Mercedes parts this year, by which time brake ducts had become ‘listed’ parts whereby teams had to design them themselves.

“Lawrence is somebody that doesn’t take any prisoners,” Wolff told Sky Sports F1.

“The legal opinion is that clearly this is a 99.9 per cent case that he will win in the ICA. There was not one millimetre, also in our opinion, that Racing Point did wrong.

Good to chat with Toto post race… Accepted defeat with grace this weekend. Interesting that he was “invited to be the mediator” between the battling teams on the Racing Point vs the gang of 4 battle… https://t.co/FtLPAMln4Y

“Now, it’s a complex matter, some regulations were interpreted in a certain way. This famous grandfather rule came up, which I haven’t heard before, but maybe it’s something you need to understand that this is the intention.

“Fair credit to the FIA, they have complex problems to solve and this is another one. But Lawrence is going to go all in. If he’s being dragged to the ICA, he’s going to employ all the resources he has and bring this to a positive end for him.”

Wolff claimed he had been asked to ‘mediate’ between the teams on the two sides of the argument in a meeting ahead of Sunday’s race.

“I don’t think that anybody is interested in this continuing for ever and going to the International Court of Appeal because it will be a month or two until there is the case, lawyers involved, and therefore everybody is trying to be pragmatic,” said the Mercedes boss.

“I was invited to be the mediator between the two groups which I tried to satisfy… they are all so stubborn! But I think we made progress a little bit and now in the next 48 hours we should come to a conclusion whether the appeals remain upheld or whether everybody decides it’s not worth going that way, Racing Point was penalised anyway.”

But Wolff did later make clear in his post-race press conference that should any team formally question Mercedes’ role in the matter, they would happily defend themselves in court.

Can the best Dodgers team yet end L.A.’s World Series drought?
We and our partners use cookies on this site to improve our service, perform analytics, personalize advertising, measure advertising performance, and remember website preferences.Ok