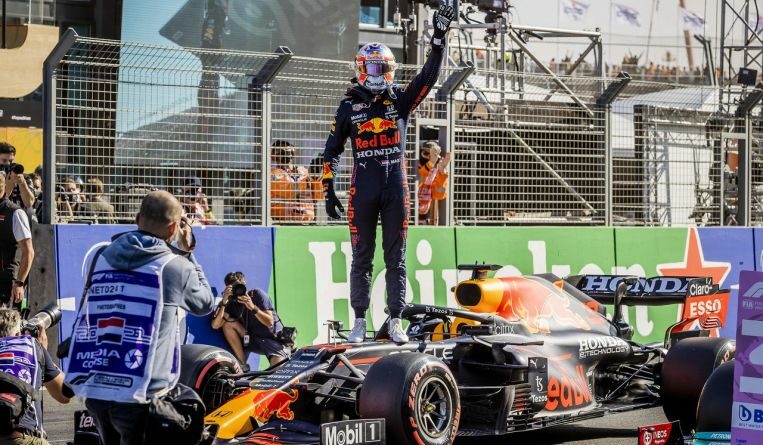 Hamilton, three points clear in the standings after 12 races, was 0.038 seconds slower for Mercedes than Verstappen’s best effort of one minute 08.885 seconds around the seaside circuit.

The pole was the sixth in the last seven races for Verstappen, and the 10th of his career.

“It’s an amazing feeling of course to get pole position here,” said Verstappen as his Orange Army let off flares and celebrated.

“The crowd is incredible and today was also very enjoyable. The car was really nice to drive and this track in qualifying, once the fuel comes out, is really cool.”

Sunday’s race will be the first Dutch Grand Prix in 36 years, the return driven by Verstappen’s success and huge following.

“He did a fantastic lap and deserves the pole,” said seven times world champion Hamilton, as some boos could be heard from the crowd.

Ferrari’s Charles Leclerc and Carlos Sainz qualified fifth and sixth with Antonio Giovinazzi standing out in seventh for Alfa Romeo.

Alpine’s Esteban Ocon and Fernando Alonso will line up eighth and ninth and Daniel Ricciardo qualified 10th for McLaren.

Williams drivers George Russell and Nicholas Latifi both crashed in the second phase of qualifying and brought out red flags.

Russell, who started on the front row at the previous race in Belgium last weekend after an astonishing qualifying lap, hit the barriers backwards but managed to keep the car running and returned to the pitlane with nearly four minutes remaining.

The Briton took no further part in qualifying and will start 11th, and when the track action re-started Latifi then lost control and smashed into the barriers in a much heavier impact.

“My tyres were going and I was pushing too hard,” said Russell. “I just attacked that corner too much and lost the rear. I’m sorry to the team.”

The second stoppage, with a minute and 38 seconds to go, meant McLaren’s Lando Norris failed to get in a quick enough lap to go through to the top 10 shootout.

Vettel, who will start in 17th place, was blocked by dawdling Haas drivers Nikita Mazepin and Mick Schumacher, and the three were summoned to see stewards after the session.

“He overtook, backed me up, and put me into Seb. I’ll have a word with the team to see why that happened,” said the Russian rookie.

Poland’s Robert Kubica, standing in at short notice for 2007 world champion Kimi Raikkonen at Alfa Romeo after the Finn tested positive for COVID-19, qualified 18th and ahead of the Haas pair.