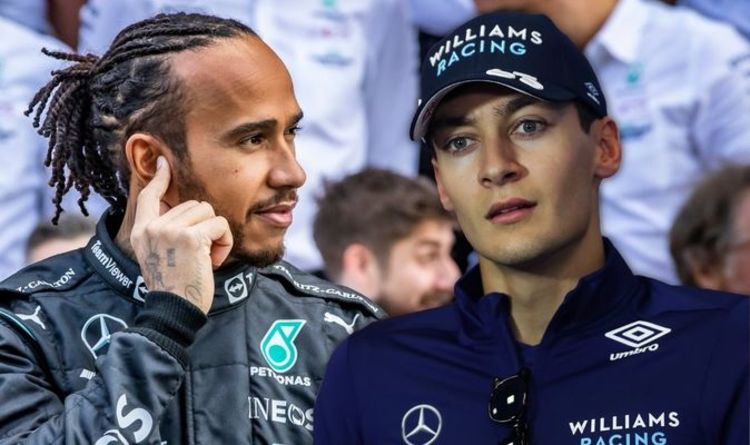 George Russell says he is expecting his workload to rocket now that he has joined the team to beat on the grid for next season. As well as increased expectation at a stronger team, the Briton will have to deal with a more intense schedule.

The top F1 teams have been planning for the future, with most of them securing a promising young talent to take them into the coming years.

Ferrari had Charles Leclerc, McLaren could count on Lando Norris and Max Verstappen looks set to lead the Red Bull charge for years to come.

But Mercedes were yet to secure their future star, with Lewis Hamilton paired with Valtteri Bottas.

The Silver Arrows decided to let the Finn leave at the end of the year and brought in Russell to replace him after months of speculation.

He is now an official Mercedes employee, having left Williams at the end of 2021, and will look forward to running at the front of the grid.

The Briton has been tipped as a future world champion, and fans will hope he can prove his talent with a faster car at his disposal.

But before he can think about race wins and titles, Russell must first get to grips with his new role and learn his trade at seven-time world champion Hamilton’s side.

Part of that includes dealing with the increased commercial responsibilities, which come with representing a higher-profile team.

And that is something he is aware of, and is making sure he gets extra rest in before the start of the new season so he can be ready for the extra workload.

“I think I am going to take a good holiday at the start of the year,” Russell said.

“I believe that is important, because I think next year will be the most intense year of my life in terms of the racing schedule, but also from an off-track and marketing side of things.

“Going from Williams, where I have been pretty fortunate in a way, not having to do so many marketing activities just because of the nature of the position we’ve been in, to Mercedes, where we’ve got tons of sponsors and lots of commitments that drivers need to tend to.

“This will be also off the back of Covid. With all the drivers and all the teams, it is all going to ramp up because the partners have missed out on 18 months’ worth of activation.

“From a racing side and off-track side, it is going to be incredibly intense.

“So January, [I will] take 10 days off, a nice holiday, reset and then hit the ground running mid-to-end of January, then put everything on the table and go for it.”

While he knows he has his work cut out on that front, he maintains he is relishing the chance to work alongside Hamilton and prove what he can do in a new era for the sport.

“I’m really excited to see the new cars and what they offer for everybody,” added Russell.

“That is really exciting, but also I am looking forward to being part of the development of a car that will be progressing drastically throughout a season, working with the designers, working on the simulator, putting lots of work in to progress.

“I am sure it won’t necessarily be who is quickest at race one will win, and I am sure there will be some interesting designs out there and might be some underdogs who prevail in the opening tests or races.

“And then obviously teaming up with Lewis is obviously incredibly exciting. I am in a privileged position to be in to go alongside the best ever.

“It is an amazing opportunity to again progress myself as a driver and see how I fare.”